Though Shruthi will be singing the couplets in original language, she will interpret them for the audience in English. 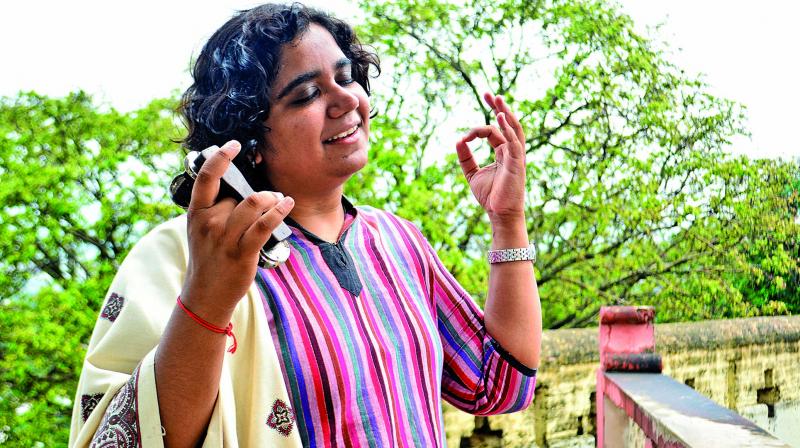 Originating from the idea of mysticism, Warkari tradition has poems by women poets defining their love for Vitthal. The Padar has Slipped will be celebrating those poets, revived and reimagined.

The padar has slipped onto my shoulder. I don’t give a damn I’ll go to the bazaar. I’ll take the taal in my hand, the veena on my shoulder. Who can stop me now?

These lines by Janabai, a 13th-century mystic poet of the warikari narrates the struggle of a woman from the dalit community claiming space, aptly resonating with the existing stature of women in today’s society. Drawing inspiration from her writing, ‘The Padar has Slipped’ is a musical revival of poems of the Warikari women composers, sung with soulful music by Shruthi Vishwanath.

“Padar means veil and these poems originate from the oldest oral bhakti tradition of Warkari where poems were composed for Vitthal of Pandharpur. It is one of the first traditions in India that was syncretic,” says Shruthi, who is trained in Carnatic music and has been singing professionally for the last five years.

The artist will be reciting, singing and explaining abhangs (devotional songs for Vitthal) by women mystic poets of the 13th and 17th century, namely Muktabai, Gonabai, Aubai, Kanhopatra, Soyrabai, Sakhubai and Bahinabai. Supported by the Indian Foundation For The Arts, Shruthi, for the last two years, has been working on reviving and setting couplets of women poets to music.

For someone who identifies herself as a feminist and has grown up singing abhangs in Pune, she noticed thatwomen poets’ didn’t have their works interpreted and set her aim. “This project is aimed to rectify some historical wrongs. To find the poems of women poets, set them to music and bring them back to the performance. Women voices are far more direct and it brings the nuances that men don’t address,” informs the singer.

While these are written in ancient Marathi and documented very well in Sri Sakal Sant Gatha, Shruthi approached a friend who has translated about 200 abhangs from old Marathi to English. “Although I do understand Marathi, this is of the 13th century which was slightly tricky,” she giggles.

Though Shruthi will be singing the couplets in original language, she will interpret them for the audience in English. As far as the music is concerned, she has given it herself, keeping it pragmatic.  “I have often digressed from what is known as the traditional meter but in composing the music for these poems, I have tried to make it as grounded as possible. Keeping the classical composition, I have drawn a lot from the folk tradition. It is not gimmicky wherein I throw a bunch of new instruments to make it sound modern. While some of them are different from what the warkari tradition usually has, they are derived from the tune,” she smiles.

For each poem Shruthi will give her perspective on it, translate and sing, giving audience a little sense of the poet’s history. There are poems of defiance, longing and love, which depict women in different relationships that they perceived with their lord. “It will follow the arc and people will get sense of history and how the story of each poet drives the poem,” she says.

But it is the couplets of Kanhopatra — a courtesan who wasn’t willing to dance in the king’s court and took refuge at Vithal’s temple in Pandharpur — that have really inspired Shruthi.

“Legends say her faith was so strong that when the king’s guard came to the temple looking for her. She was no where to be found. It is said that the only thing remaining of this poet was a little tree growing next to the Vitthal statute. Moreover, what is remarkable is that the woman who was just a courtesan is the only person, to have her samadhi in the Pandharpur complex. I will be singing the gut wrenching poem by her where she address Vitthal as her mother,” says Shruthi.

What really inspires her is the nature of these poems that are radical and question the society.  “Right now we tend to paint spiritual tradition through a singular lense. But this reinforces my belief that bhakti and mysticism aren’t singular. They must be looked at and celebrated from multiple lenses. And this is about bringing in the length of intersectionality in various ways, gender, cast and class,” she says.

Having performed the Warkari poems in Pune, Chennai, Pondicherry and Ahmedabad, this format is a first. And this project doesn’t end here for Shruti as she plans to circulate it back to the community from where it originated.

“I will be taking it to lot more villages and towns. Mainly getting the communities to sing these songs again. This is just the beginning of what I would be dong with these abhangs,” she concludes.
— Today, At Studio Tamaasha, Versova