Researchers carefully step around the nesting crabs to scoop up the evidence - potentially flu-infected bird droppings. 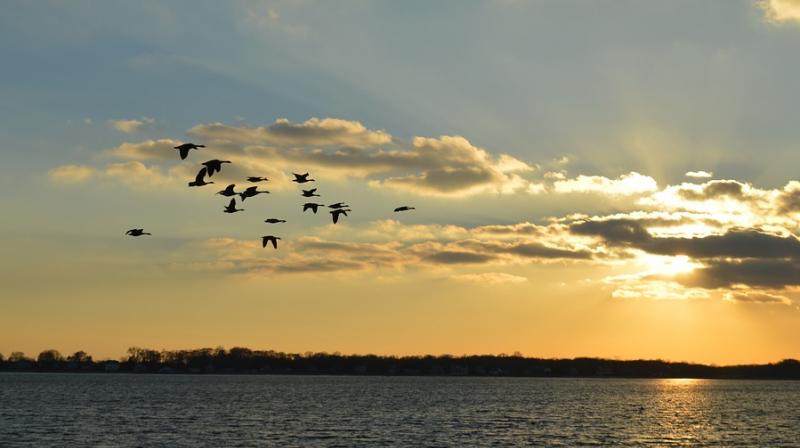 It's a marvel of ecology as shorebirds migrating from South America to the Arctic time a stop critical to their survival to this mass crab spawning. It's also one of the world's hot spots for bird flu - a bonanza for scientists seeking clues about how influenza evolves so they just might better protect people.

"Eventually, we would like to be able to predict which would be the next pandemic," said flu pioneer Robert Webster of St. Jude Children's Research Hospital.
These humble beaches turn into a mixing bowl for influenza between mid-May and early June, as thousands of shorebirds and gulls crowd together and swap viruses. Researchers carefully step around the nesting crabs to scoop up the evidence - potentially flu-infected bird droppings.

"We have trained our eyes for this, that's for sure," said St. Jude researcher Pamela McKenzie as she bent over damp sand last month in search of the freshest samples to go on ice for later testing. Not just any splat will do. Too dry, and tests might not be able to detect virus. Too big, and it's likely not from the species that carries the most flu here, the calico-patterned ruddy turnstone.

Why test birds? "That's where all flu viruses come from," said Richard Webby, who directs St. Jude's Center of Excellence for Influenza Research and Surveillance, a program funded by the National Institutes of Health.

Aquatic birds, including wild ducks and migrating shorebirds, are considered nature's main reservoir for influenza. Whether it's the typical winter misery or a pandemic, every strain that infects humans "started off somewhere along the family tree in the aquatic bird reservoirs," Webby said.

Usually wild birds don't get sick, simply trading flu viruses they carry in the gut. But strains from wild birds can threaten domesticated chickens and turkeys, and every so often jump to pigs or even people.

St. Jude's annual study at Delaware Bay offers a glimpse into little-known efforts around the world - including testing migrating ducks in China and Canada, and live poultry markets in Bangladesh - to track how bird flu circulates and changes, information that can help determine what vaccines to make for animals and people. And nowhere else in the world have scientists found so many shorebirds carrying diverse flu strains as when red knots, ruddy turnstones and other species make their migratory stopover at this bay nestled between New Jersey and Delaware.

Most bird flu isn't easily spread to people, stressed McKenzie, who doesn't even wear gloves as she pooper-scoops along a beach before the tide washes back.
Still, "it's amazing how the virus can change so rapidly, what genes they inherit," added McKenzie, who oversees St. Jude's global bird flu surveillance.

The U.S. stockpiles just-in-case vaccines against worrisome strains. "It only has to happen once," Webby said. "The right virus comes and gets into the right population which happens to fly over the right farm of turkeys which happens at the right time of year where the right farmer picks up the wrong bird - and we're in trouble."

Webster, now an emeritus virologist at St. Jude, made the connection between bird and human flu decades ago when he found some seabirds in Australia carrying antibodies against the strain that caused the 1957 pandemic. In 1985, his continuing hunt for bird flu took him to Delaware Bay. Today, scientists know that if two different types of flu infect a single animal at the same time - say a pig catches both a chicken strain and a human strain - the genes can shuffle to produce a totally new virus.

But worry about bird flu as a threat to both poultry farms and humans has grown since a strain named H5N1 spread directly to people in the late 1990s in Hong Kong's crowded live-poultry markets. Cousins of that virus have cropped up, as has another flu named H7N9 that since 2013 has infected more than 1,500 people in China through close contact with infected chickens.

Those are very different viruses than what St. Jude finds in shorebirds passing through Delaware Bay, Webby said. For some reason, viruses carried by Asian and European birds rarely make it to the Americas, he said, but it's important to look - and to understand the normal ebb and flow of different strains so it's more obvious when something new crops up.

The research is "one way to stay a little bit ahead of the virus," said Marciela DeGrace of NIH's National Institute of Allergy and Infectious Diseases. "Understanding how this virus can change and how much it can change in a quick amount of time is going to be critical for us to make countermeasures like vaccines."

Why flu erupts during the Delaware Bay stopover remains a mystery. But the longest travelers arrive wasted, and must double their weight in two weeks. "You can hold a bird and say, 'This bird just got here.' They're here to do work," said Alinde Fojtik of the University of Georgia's Southeastern Cooperative Wildlife Disease Study, a longtime flu researcher who this year volunteered her vacation to help count and tag shorebirds.

So the birds can feast uninterrupted, only scientists and conservation workers are allowed on their preferred beaches, carefully catching and counting them, testing their overall health and tagging them for tracking as the migration continues.

For the flu hunters, finding the right spot is a trick. St. Jude researcher Patrick Seiler pulls out binoculars: Nope, mostly gulls on one beach. Down the road, he spots a better target, a crowd of ruddy turnstones with their distinctive black, white and brown plumage.

The skittish birds take flight as the team approaches. Each dropping gets whisked up on a cotton swab, put into a small vial of preservative and stored in a cooler.
The team carried more than 600 samples back to St. Jude's labs in Memphis, Tennessee, where researchers are beginning the monthslong process to test how many droppings harbor flu and what kind. The viral library is used for further experiments to test how well strains spread, said NIH's DeGrace.

"I would love to be able to look at the sequence of virus we find in Delaware Bay this year say, 'Uh-oh, that's the guy that's coming.' We're not at that point yet," Webby cautioned. "That's our end goal, to be able to say, 'Uh-oh, here's something we have to worry about.'"