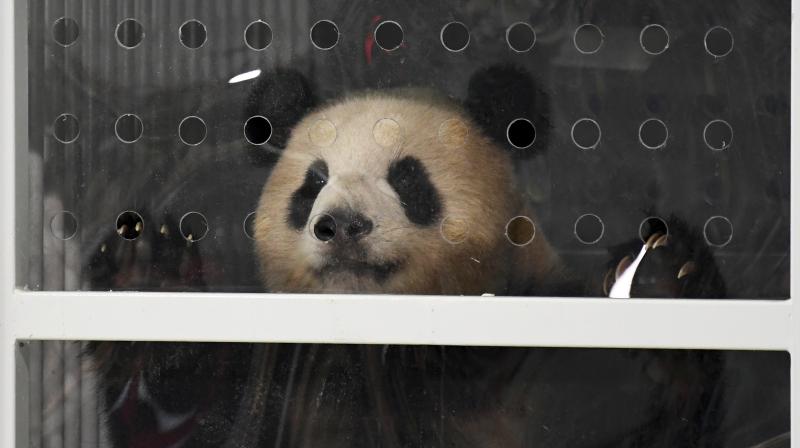 Giant panda Meng Meng looks out of its container after the arrival from China at the airport Schoenefeld near Berlin, Saturday, June 24, 2017. Two giant pandas from China have landed safely in Berlin where they are being welcomed by the German capital's mayor and the Chinese ambassador. Meng Meng and Jiao Qing were treated like royalty on their 12-hour-flight from Chengdu in southwestern China — their entourage included a Berlin veterinarian, two Chinese zookeepers and traveling press. The German capital is going nuts over the cute bears, which will first be presented to the public at the zoo on July 6. (Ralf Hirschberger/dpa via AP)

Two giant pandas set to become the star attractions at the Berlin zoo are exploring their new living quarters and enjoying their favourite meal of bamboo after arriving from China.

Footage released by the zoo on Tuesday showed Jiao Quing and Meng Meng roaming around what zookeepers call their living room, an indoor area stocked with wooden obstacles for climbing, a bear-sized wooden chair and bamboo to eat.

"Today is of course a special day - if they didn’t feel at home here it would mean we screwed up," zookeeper Christian Toll said.

There are about 1,800 giant pandas in the wild, according to the International Union for Conservation of Nature, which classifies them as "vulnerable." Rare, picky in their diet, and reluctant breeders, pandas are in demand from zoos worldwide.

Germany is to pay China $1 million annually over 15 years to host the pandas, with most of the money going to China's panda conservation and breeding programme.

Having already been welcomed by Berlin's mayor and China's ambassador to Germany, the bears face more VIP encounters with German Chancellor Angela Merkel and Chinese President Xi Jinping set to visit them during the G20 summit in Hamburg next month.

China is known for using the animals as tools for building international relationships - so-called "panda diplomacy" that allows states it seeks closer ties with to host pandas in zoos.