Modi's counterpart from Netherlands tweets in Hindi, gets trolled on social site. 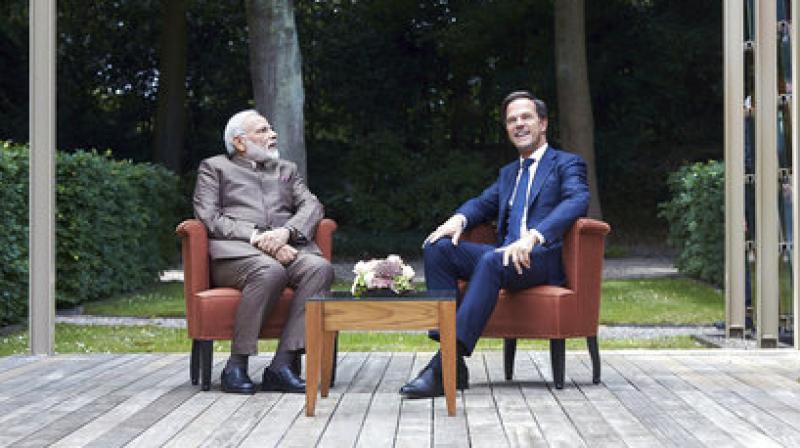 Indian Prime Minister Narendra Modi, left, and Dutch Prime Minister Mark Rutte during a meeting in the garden of the Catshuis residence in The Hague, Netherlands, Tuesday, June 27, 2017. Modi has met his Dutch counterpart during a brief stop in the Netherlands on his way home from meeting President Donald Trump in Washington, D.C. (AP Photo/Phil Nijhuis)

New Delhi: PM Modi has just returned to India on the completion of his three-nation tour. The Pm visited Portugal, US and finally Netherlands. Interestingly, the year also marks 70-years of Indo-Dutch Diplomatic ties. While there were quite a few more important discussions at the tour, one thing that stands out seems to have no political connection at all.

PM Modi, during his visit to Netherlands tweeted enthusiastically in Dutch several times, to which his Dutch counterpart Mark Rutte replied in Hindi. But, it seems like there might have been a few glitches in the message. A faulty keyboard maybe? The message that was tweeted had not a single space in between. Quite a mouthful to read actually.

"Welcome to the Netherlands @narendramodi Our bilateral relations go back 70 years and with that I am extremely excited about our meeting," reads the tweet, roughly translated.”

The tweet which was retweeted over five hundred times and was commented upon for over eight hundred times quickly went viral with many pointing out the obvious flaws in it.

Tweeted about 18 hours ago, the tweet quickly went viral, with many pointing out the obvious, Super Commando Dhruv tweeted,

But not all were scathing in their pointing out of flaws. Naveen Kumar pounted out in his tweet,

Yes, but be sure it's not his language . At least he tried must be appreciated.

And Annie Singh appreciated the effort,

Luckily, the Dutch PM tweeted again after meeting PM Modi, getting it right the second time around.