Be wary of chronic insomnia

Those suffering from obesity, snoring, choking while asleep, and daytime somnolence are found to suffer from this condition. 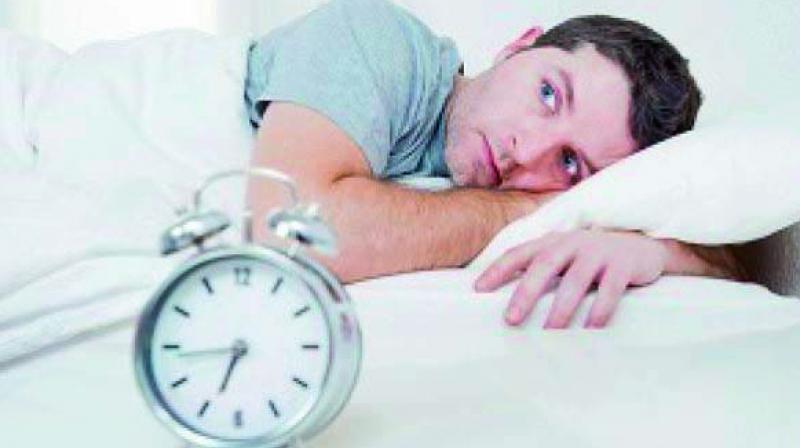 Aging individuals or those suffering from obesity, diabetes, and cardiovascular diseases often also suffer from sleep disorders. And sleep disorders have been found to affect not just the heart, but also the memory and cognitive skills of the sufferer.

Aging individuals or those suffering from obesity, diabetes, and cardiovascular diseases often also suffer from sleep disorders. And sleep disorders have been found to affect not just the heart, but also the memory and cognitive skills of the sufferer. Between twenty and twenty-five per cent of the Indian population has reported experiencing chronic insomnia — an underlying cause of many non-communicable diseases. We got in touch with Dr V.V. Ramana Prasad, consultant pulmonologist at KIMS Hospitals, for his professional opinion on the subject.

Q What is chronic insomnia?

Chronic insomnia is defined as disturbed sleep that one might experience at least three nights every week for three months or more. The condition continues to recur in a cyclical manner and more often than not, patients cannot identify why their sleep patterns are changing.

Those suffering from obesity, snoring, choking while asleep, and daytime somnolence are found to suffer from this condition.

Q What is the incidence of chronic insomnia in India? What age groups are found to suffer from it?

About 20-25 per cent of the Indian population has been found to suffer from chronic insomnia, and a majority of this proportion comprises middle-aged and elderly patients.

More females than males have reported suffering from the condition, more so during their pre-menopausal and menopausal phases owing to the hormonal changes associated with the phases. Some women have even reported not being able to sleep for up to three days in a row. These women are also found to suffer from daytime somnolence and are often irritable and angry.

Additionally, those into alcohol and substance abuse and those suffering from depression are also found to suffer from insomnia a great deal.

Q Is it diagnosed on time?

Most people in India take a while to realise that their lack of sleep is a matter of concern, which leads to a delay in diagnosis. Patients usually present with conditions of other non-communicable diseases and only further investigation leads to the diagnosis of insomnia.

Following a thorough examination of the patient’s medical history, a doctor will usually prescribe first-line drugs for relief. However, majority patients return to report only temporary relief, which is when sleep disorder tests are taken up before further action. These tests provide a detailed insight into the causes of fatigue and lack of sleep in the patient, which are considered critical to be identified before prescribing treatment.

Q It is found that those suffering from diabetes usually also suffer from chronic insomnia. If so, then how can both the diseases be managed?

50 per cent diabetics have been found to suffer from chronic insomnia caused by the associated frequent urination, anxiety, age, obesity, and neuropathy. It is very important for these patients to avoid doctor hopping as that can lead to delayed diagnosis and treatment of insomnia.

Q Those suffering from insomnia are also found to suffer from cognitive decline, memory loss, and heart conditions. Insomnia has also been associated with inflammation. How can these various conditions be dealt with?

Lack of sleep is only one of the many factors that cause a decline in cognition and memory functions. Heart conditions and inflammation, however, have been documented as majorly associated with insomnia and demand a disciplined treatment and recovery regimen.

It should also be noted that if one cannot sleep within the first 20 minutes after going to bed, then they must leave the room and return only when sleepy. Maintaining good sleep hygiene is important and that requires observing certain basic lifestyle habits like avoiding smoking, alcohol, or excessive coffee consumption. In fact, even exercising before bedtime has been observed to hamper sleeping patterns.

Q What is the likelihood of the recurrence of insomnia after recovery? Is insomnia a lifelong condition?

In majority of patients, treating just the underlying cause has been found to cure insomnia. However, some patients could take longer to recover than others, especially if they do not observe proper sleep hygiene, which also increases the likelihood of recurrence.