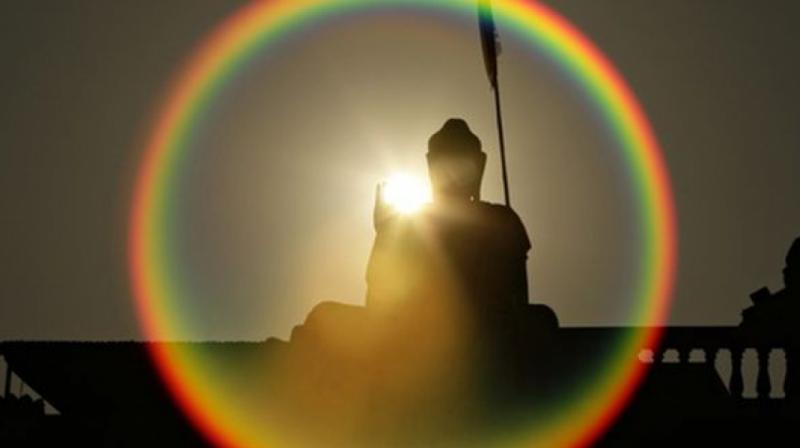 Buddhism was the first software of ideas and ethics we shipped all over Asia. (Photo: AP)

From the Great Wall of China, I was wondering whether any country in the world could build something of that scale. That is one thing I noted. Everything is done on a big scale, from Airports to express highways. In Shanghai, Beijing and Kunming, there were millions of bicycles, but now there are hardly any of them on the main roads. Once upon a time, Mao was visible, and now it is like he is almost forgotten. The country is on the move. In Mandarin, China means the 'centre of the world' and many of them tend to think China is once again becoming the centre of the world.

China and India are two ancient civilisations. But there is a key difference.  While China is good at hardware, India always exported its software. Buddhism was the first software of ideas and ethics we shipped all over Asia. Indian Ayurveda,  Yoga and Kamasuthra travelled across mountains and seas and we did export  Zero bases of the numeral system, that marked the beginning of many new knowledge areas. We did have a Ramanuja and now our software engineers are all over the world. But we owe to China for the tea we drink in the morning. Sugar is called 'cheeni' for it came from China. Kerala had more than five hundred years trade links with China, influencing our food and architecture. Cheena bharani, Cheena Chatti, Cheena vala, etc. still reminds us of the China connection. China was in many ways ahead in terms of its capacity for hardware development and shipping.

Today China has become global. Most of the mobile phones, computers and many other things do have 'made in China ' mark. And this aptitude for hardware is what made the country the manufacturing house of the world. Meanwhile, India seeks to influence by exporting Yoga all around the world. Yoga too has a global market as much as made in China mobile phones.

But China has layers and layers behind what we seem to know. Even after fifteen visits, I am still trying to learn more about a great civilisation that influenced the world in many ways.