Kerala priest calls for women in jeans to be drowned

He said that women should be tied down to the depths of the sea for dressing like that. 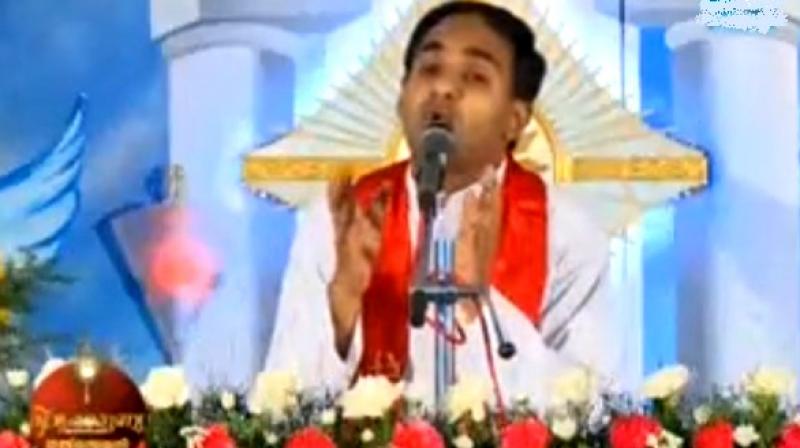 Society has been subjecting women to bizarre opinions on their dressing, and many have used the same for justifying rapes. Some leaders in the past have also blamed calamities like earthquakes on “promiscuous women”.

Now a shocking footage has emerged featuring a priest from Kerala criticising women for wearing jeans and saying that they should all be drowned in the sea for “tempting men”. He also goes on to justify rape on the basis of the way women dress.

Here’s the full text of the video,

When I see some girls, I don’t feel like giving out my gospel or letting them enter church even. They would be dressed in a shirt, a pair of jeans, with their hair untamed, a phone in tow, to show of to whomsoever concerned; why that ‘thing’ even bothered to come is beyond me. I ask to the women here, has the Holy Bible allowed you to wear men’s shirt and pants?

After I lecture young men on the ways of God, they come to me later and tell me, ‘Father, after absorbing all the knowledge you give us, we exit and are exposed to semi-naked women. We’re involuntarily provoked and aroused’. What have the preachings taught us about this? ‘It’s best to tie the source of provocation down to the depths of the sea.’ When a father or a young man has come to the church to offer themselves to the God, if you’re standing beside him, having dressed provocatively enough to distract him, you’re a sinner, and you deserve to be tied down to the depths of the sea.

And then you complain that you can’t find a groom or a job.

Thanks to the way you dress.

Once a family brought their son who got his elder sister pregnant, to me, for counseling. When I asked him why he had committed the sin, he shared his sorrow with me. He told me when their parents left for work, it was just his sister and him alone at home. All he could see was her roaming around in her revealing shorts and tee.

If you are someone who provokes their own brother and family, my Lord won’t accept you if you come to the church.

The video has sparked outrage after it went viral, since it comes at a time when a heated debate around women’s security if raging on in the wake of the blatant victim shaming following Bengaluru mass molestation.