On his 91st birthday, veteran music maestro Pandit Jasraj gets candid about his musical journey and his future plans. 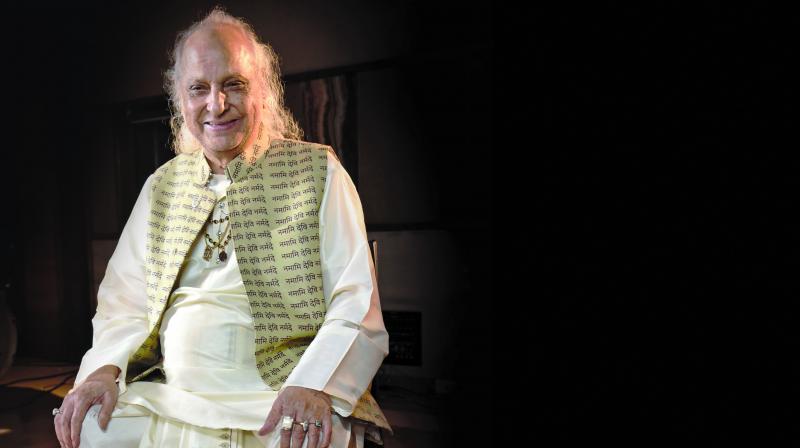 Sangeet Martand Pandit Jasraj, dressed in a traditional white kurta and lungi, is warm and welcoming as we enter his Versova apartment. The classical vocalist, who is celebrating his 91st birthday today, has spent over seven decades in the business and become a force to reckon with in Indian classical music. It is his diligence for music that keeps him going even at this age, he shares.

“Age is nothing because music gives me energy and I will continue performing with the same passion,” he says while settling into a chair near the dining table.

The fifth-generation classical vocalist of the Mewati Gharana, Pandit Jasraj is known for his heightened devotion and melodious voice with a magnificent range. His music also elicits a response from nature, as Indian classical music is known to do when performed correctly. For instance, in 1987 when Pandit Jasraj was performing raga Todi (which is associated with deer), a deer ran past the audience and stopped just opposite him for five minutes. The incident was much akin to a moment in 16th century when legendary singers Tansen and Baiju Bawra sang raga Todi at a recital in Agra. It is said that when Tansen began to sing, a herd of deer came rushing into the audience, only to create visual imagery for every raga. Since then, it is said that the raga is performed right if it connects to these elements of nature.

“That was nothing less than a miracle. It happened when more than five thousand people were sitting in the recital and there were many veteran musicians,” recalls the maestro, who believes that he has not achieved a thing in spite of his decades-long successful career. “If I say I have achieved something, that means my life has stopped. I haven’t achieved anything. I can show many things, but deep down I know I am just going with the flow and performing,” he explains.

Sharing another incident from 1994, Jasraj recalls that a day after he performed raag Malhar (which is closely associated with torrential rains), in then drought-afflicted Gujarat, it started raining.  Similar incidents have occurred in Rajasthan and in Delhi on full moon nights as well, where there was no sign of monsoon and rain. “If you sing from within, you attract the universe and that’s the beauty of classical music. I won’t say I was responsible for that, but my music was responsible. Classical music has that power,” the musician shares.

A recipient of Padma Bhushan (1990) and Padma Vibhushan (2000), the veteran vocalist has enthralled many generations with his magnificent voice. He has never failed to draw his audiences emotionally at his recital, just like Begum Akhtar’s voice drew him into music in his childhood. Recalls his school days from 1936, Jasraj shares that instead of going to school, he would sit on a footpath and repeatedly listen to Begum Akhtar’s song on a gramophone at a small restaurant on the way to school.

“In a few days, restaurant staff understood that I sit there to listen to the music they play. They would ask me if I wanted to eat something but I would only demand water and sit all day to listen to the same track,” he reminisces, adding with a laugh that his family members didn’t know of this until one day his mother and teacher bumped into each other in a market. “The teacher asked my mother if I was unwell and informed her that I wasn’t coming to school at all. My family scolded me, but I was never interested in studies. I loved music and played the tabla at the age of four,” he smiles.

As for celebrating his 90s, the musician will see his students across the world celebrating his birthday as a festival — something that he prefers. “I like celebrating my birthday on a grand scale. I need a big party, but I don’t know how to celebrate because my family and students plan it,” he laughs, adding, “I am like a child, so I am happy all the time. There should always be a child in you,” he opines.