Indian Classical musicians too happen to be in a festive mood, and they have their repertoire to show for it. 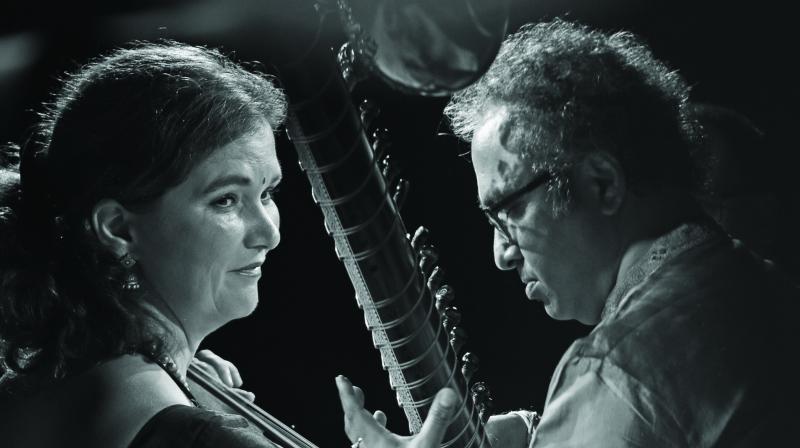 Musicians are first and foremost humans, susceptible to the influences in their surroundings. Delhi and other urban settings are totally consumed by the Christmas spirit, be it in shops, eateries, or the music one hears on radio and TV. As such, their response as musicians to Christmas is inevitable; one hears many versions of Jingle Bells, Silent Night and the like on social media platforms. Interestingly, these are all limited to instrumental versions; sarod, sitar, flute, or violin. The vocalists, by and large seem uninspired by the Christmas spirit, though there are of course exceptions.

Ustad Shujaat Khan has made Delhi his home for many years now; the maestro recalled a concert he played a few years ago in the Rashtrapati Bhawan church. He said, “I remember I played a very quiet Silent Night. Churches have a natural sound resonance, which is so beautiful. Of course, we musicians play in churches in Europe all the time.”

Vocalist Sunanda Sharma, senior disciple of Padma Vibhushan Girija Devi, spends most Christmases in Norway with her musician husband, despite being Delhi based. Christmas concerts are very much a part of her routine there; she has incorporated several Nordic Christmas songs in her repertoire; she laughed, “Would love to sing these in Delhi sometime. I find the notes of many of the songs familiar; and I embellish the songs in my way. There is one, based on the notes of Raga Puriya, that I find particularly poignant; the lyrics speak of the birth of baby Jesus, and describe the silent scene. I was asked to sing Christmas carols in my way by the famous Norwegian saxophonist Trygve Seim some years ago, and it’s now became an annual ritual for me.”

Delhi-based Pt Shubhendra Rao, senior disciple of Bharat Ratna Pt Ravi Shankar along with his cello playing wife Saskia (disciple of Pt Hari Prasad Chaurasia) and pianist son Ishaan, have recorded their version of Mozart’s Dona Nobis Pacem, on sitar, cello and piano, for their Christmas e-greeting card. Shubhendra said, “I don’t remember my Guruji ever playing anything Christmassy, but of course any celebration was something he enjoyed always. I think in a certain sense, linking one’s music with the Christmas season is a newer trend. For Saskia and me, sending this e-card made a lot of sense, as it’s not only about Christmas, it’s an ode to peace. All over the world we are living in difficult times; this e-card made sense to bring music and peace together. In Latin, the meaning of the piece is actually “Grant us peace”. Saskia with her background in all types of music, and all of us coming together to play this together, was very enjoyable.”

Instrumentalists from the younger generation, Delhi’s own Lakshaye and Aayush Mohan, have a different take — “We think it’s good for the popularity of classical music; it’s gateway. Someone may never have heard a sitar or sarod before; they may like it, and then want to explore further.”

Ustad Murad Ali Khan, renowned sarangi player in Delhi, sums up the aim behind these experiments through an Urdu shair — “Unka jo kaam hai, woh ail e siyaasat jaane, hamara kaam  paigaam e mohabat hai, jahan tak pohunche. Through notes, we musicians can try and spread a message of love. Notes don’t have a religion; we all have the same 12 notes that we use; let’s use them to spread peace. I personally feel we need to be inclusive right now and spread harmony; what better way than through seasonal music?”