The show must go on

Fifteen years after noted theatre director Dinesh Thakur first staged the play, it still continues to have a good run. 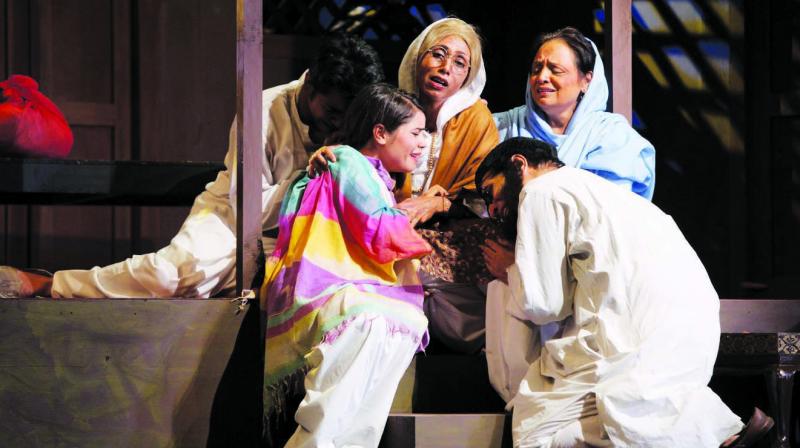 Even though Preeta has received high acclaim for her performance, she was initially opposed to breathing life into the role.

During the tumultuous period of Partition, a Muslim refugee family travelling from Lucknow gets allotted a Hindu jeweller’s house in Lahore. The family of four, having survived the worst, moves into the house. Much to their dismay, they find a surviving remnant of the previous occupants – Ratan ki Maa, the grandmother who refuses to let go of the life she has always known. Having played the role of Ratan ki Maa for over a decade now, Preeta Mathur will be reprising the role again for the 308th show of Ank’s heart-warming and gut-wrenching stage-production Jis Lahore Nahi Dekhya.

Written in the 1980s by Syed Asghar Wajahat, an eminent Hindi playwright and the recipient of Sangeet Natak Akademi Award, Jis Lahore Nahi Dekhya was first brought to stage by the late Habib Tanvir at Sri Ram Center in 1990. However, it was the late theatre director-actor and founder of Ank (one of the country’s oldest Hindi theatre group) Dinesh Thakur’s 2003 production that became one of the most successful adaptations. His wife Preeta reveals that with the communal tensions so high in the country with Gujarat-riots, it came from a place of deep anguish in Dinesh. “The intellectual classes were getting affected as all the prejudices had started creeping in upper-mobile drawing rooms which was a big cause of worry. And as artists what you can do is create something that can make people think about what kind of prejudice they are indulging in,” she reveals.

In the premise of highly communally charged environment of Partition, a twist arrives in the play when the new occupants of the house start warming up to Preeta’s character and from Ratan ki Ma she becomes a dadi. However, agents outside the house like the goons and politicians continue to play around with the theme of communalism for their own self-interest. Describing the play, Preeta informs, “There is a bit of light on what religion actually means and how politicians and other vested interests have hijacked it to make it something else. The play is all about how all the divisions of religion, caste and countries really don’t matter when there are human emotions and kindness involved.” Although the production has retained the original design and direction of Dinesh, Preeta has extended the narrative to incorporate talks about global acts of terrorism and even have had shows in Dubai  and Singapore.

Even though Preeta has received high acclaim for her performance, she was initially opposed to breathing life into the role. As a young actress, she thought she was more well-suited for the Begum’s role but it was Dinesh’s vision that could see her mould into the role quite convincingly. “He insisted that I take it up as a challenge which I did. In fact, I am the only character in the play that speaks entirely Punjabi and I didn’t know how to speak the language. So I learnt Punjabi and with music director Kuldeep Singh help, I perfected the pronunciation,” she reveals the challenges she faced.

For a play that was written in the 80s, talked about Partition, staged during the early 2000s riots, and continues to go on in the time of intolerance and communal tension, Jis Lahore Nahi Dekhya has safely earned the reputation of being a universal play. According to Preeta, the reason for its continued success lies in the fact that it tackles the subject of communalism, and also reveals the emotional aspect of Partition that gets mostly lost in the facts and figures of history books. “There is a whole chapter on Partition, which although the young people of the country are learning, they are not cognisant with the emotional aspect of it. So the emotions that were involved in that part of the time, they are something of a revelation to most of the youth,” she says.

Preeta, who is now helming the responsibility of managing Ank, concludes by revealing that there was a time when the play was banned in Gujarat, but having had their last performance in Ahmedabad recently, she can see the change in people.

The show will be performed on December 30 at NCPA.