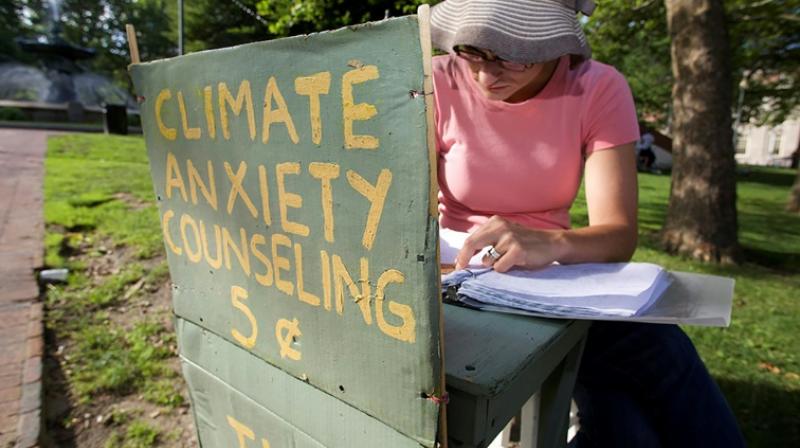 Washington: In the melting Arctic, communities are racing to maintain their way of life. In the rising Pacific, residents are sounding alarm bells. And in Rhode Island, Kate Schapira and her husband are not having a baby. Fears about climate change are prompting worldwide action, but one knock-on effect in the United States is mounting anxiety about everything from plastics to class-based environmental disparities.

Schapira, a 40-year-old senior lecturer in the English department at Brown University, is addressing that unease in a number of ways. The decision not to have children was not just about a concern for their future well-being amid environmental degradation, she explained, but also about not wanting "my sense of responsibility to the world to shrink down to the size of one person."

Schapira also says she has likely taken her last flight. She said she was troubled that people were treating her climate fears "like a personal, individual problem," she said, and she wanted to "see if that was actually the case." So in 2014, Schapira started setting up a "climate anxiety" booth in public spaces, such as farmers' markets. It's a bit like Lucy's psychiatry stall from the beloved comic "Peanuts."

"Climate anxiety counselling, 5 cents. The doctor is in," the booth's sign reads, welcoming passersby in Providence to talk about their fears. As it turns out, Schapira was far from alone. About six in 10 Americans say they are at least "somewhat worried" about global warming and 23 per cent say they are "very worried," according to a survey conducted by Yale and George Mason universities in March and April.

Anthony Leiserowitz, director of the Yale Program on Climate Change Communication, said Americans can be broken into six categories based on their reaction to climate change, ranging from alarmed to dismissive. "The common wisdom is that only upper-middle-class, white, well-educated, latte-sipping liberals care about climate change. Turns out that's not true," Leiserowitz said.

None of the six groups is majorly driven by one demographic, he said, with the exception of the "dismissiveness" -- where "well-educated conservative white men" reign. They are "dramatically different in terms of how they perceive the risk than everybody else," he said, thanks in large part to "a worldview that we call individualism" -- particularly pronounced in that group.

Of course, that same demographic also happens to control the White House, half of Congress and many of the nation's richest companies, such as in the fossil fuel industry. As the world's top experts head to Spain for the UN summit on climate change opening Monday, Americans must deal with the idea that President Donald Trump withdrew the US from the Paris climate accord.

For Lise Van Susteren, a Washington-based psychiatrist who has been studying the mental health impacts of climate change for 15 years, refusal to recognize the potential hazards is common for "people who are trying to deny that they too are vulnerable."

"I actually have no hesitation in saying that on some level, I believe that everyone now has some climate anxiety," Van Susteren said. Psychological responses to climate change such as "conflict avoidance, fatalism, fear, helplessness and resignation are growing," according to a 2017 report by the American Psychological Association and ecoAmerica.

And they coincide with an array of physical health impacts, such as asthma and allergies. At a happy hour for environmentalists in Washington, Alicia Cannon -- who works in environmental policy lobbying -- was asked whether she was experiencing any climate anxiety. Her response: "Oh God, yes."

"I think a lot of people that work in climate feel some kind of climate anxiety because it's such a large-scale issue and it's overwhelming and you feel that it's overwhelming because of helplessness," the 23-year-old said. According to Van Susteren, such feelings can lead people to question whether their individual actions are meaningful in light of the vast nature of the problem.

"What we do individually is counted collectively," she said, indicating that one person's behaviours can help establish consequential social norms. Debbie Chang, 43, who organized a group counselling session on dealing with climate anxiety on the National Mall in Washington in May, has also decided not to have kids and tries to follow a zero-waste policy.

She keeps chopsticks in her purse to avoid single-use plastic utensils, carries a handkerchief to substitute for paper napkins, and brings a steel container with her to restaurants for any leftovers she might want.

Chang said until not that long ago, it was difficult to find information on "climate anxiety, climate grief, climate despair, climate counselling." Now "there's more... people are starting to realize it's a thing," she added.