Twitterati were confused over Prince Harry being addressed as Prince Henry in a document announcing the engagement. 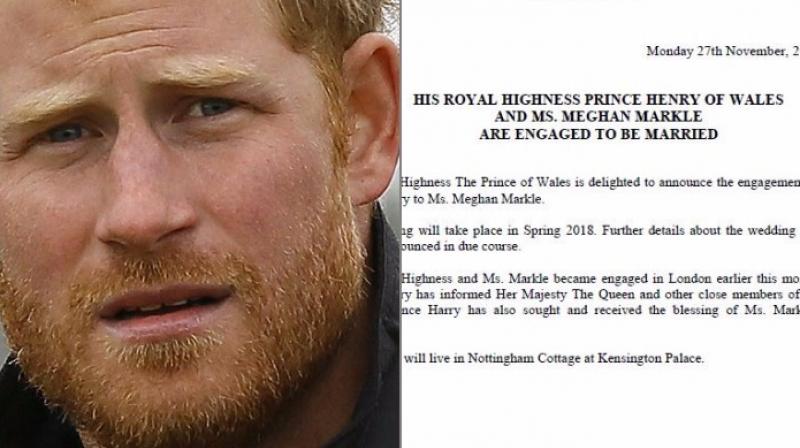 Harry is a diminutive for many people named Henry (Photo: Twitter/AFP)

After being in the news for months, Britain’s younger Prince Harry and American actress Megan Markle are all set to tie the knot. A tweet from Clarence House’s official Twitter handle announced their engagement on social media.

The Prince of Wales is delighted to announce the engagement of Prince Harry to Ms. Meghan Markle. pic.twitter.com/zdaHR4mcY6

But while most are celebrating, there were many who were left confused as the document addressed the prince as ‘His Royal Highness Prince Henry of Wales’.

Congratulations but who’s prince Henry of wales? .... or am I missing something?

I thought that, the headline reads Henry but article says Harry 🤔

As people were wondering if the official handle of Clarence House had made a mistake, many pointed out that this was actually Prince Harry’s real name.

Henry is his real name x

I'm just amused by the amount of people who don't know that Harry is short for Henry.

One user mentioned how Harry is used as a diminutive for many other people named Henry and not just the prince.

Henry is his Christened name. Many Henry's are then called Harry. My Grandad was.

He was christened Henry but was always to be known as Harry (which is the diminutive of Henry. Weird I know)

Born in 1984, the younger son of Charles, Prince of Wales and Diana, Princess of Wales was christened Henry but has always been known to the world as Harry.

His fiancée Meghan Markle is an actress who shot to fame with legal drama suits and was married to producer Trevor Engelson till they separated in 2013. Born to a Caucasian father and African American mother, Meghan is of mixed heritage.