Look! It’s the time to Garba

With Navratri just around the corner, the whole city is gearing up for the nine-day long festival of dance, music, colours and puja. 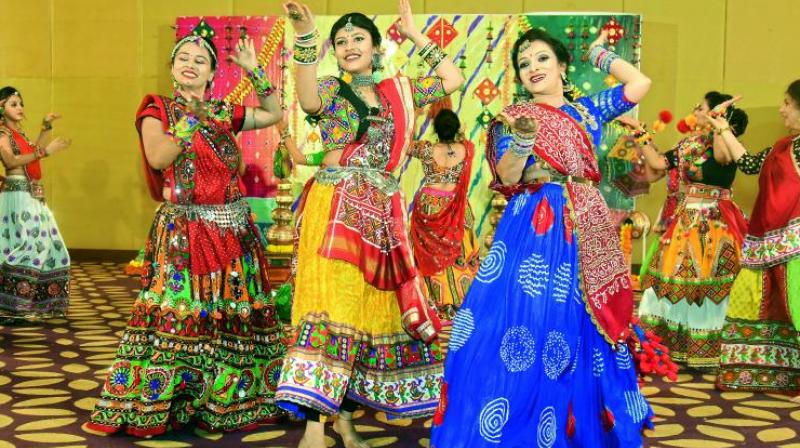 Garba choreographer Bina Mehta, along with others, dancing to the beats of garba songs.

Dedicated to the Mother Goddess, the nine-day long Navratri festival is not just about fasting and pujas, it also whips up a riot of colours, lively folk music, graceful dancers and flowing traditional chaniya-cholis, best accessorised with kohl-lined eyes and clinking jewellery.

And while actresses like Aishwarya Rai and Deepika Padukone are seen taking keen part in Garba, even city denizens are gearing up for Navratri by extensively rehearsing their steps for the traditional Gujarati dance form.

Khushboo Goda, a young working professional from the city who takes part in these Garba nights each year, shares, “Almost everyone looks forward to Garba nights. In fact, there are times that the venues are so full that people have to wait outside for others to leave first! Also, there are many Dandiya and Garba classes that open up two months ahead of Navratri and most of them are full in no time.”

It's all about the music
Traditionally, Garba and Dandiya are played on devotional songs dedicated to Goddess Durga. Explains city-based Garba choreographer Bina Mehta, “Traditionally, Garba is an earthen pot which we decorate and light a diya inside. Then the ladies of the house or sometimes even the neighbours come together to pray to the Goddess. They sing Garba — devotional songs dedicated to Ambe Maa — and dance.”

Of course, with time, things have changed.

“There are many Bollywood numbers mixed with Garba beats that people dance on. While there are a few tracks that are always played like Dholi Taro Dhol Baaje and Nagada Sang Dhol Baaje, each year, there are a few new songs added to the list. This year, I am looking forward to perform on Chogada from Loveyatri and Radhe Radhe from Dreamgirl,” shares Khushboo, adding, “People are also excited about Sanedo, a traditional Gujarati Garba song and Vithala during the Garba nights.”

Dance in style
Naturally, Garba nights are as much about dressing up as they are about graceful dance moves. In fact, many youngsters shop for different outfits and accessories for all the nine days. Interestingly, the event organisers also host competitions for the best dressed participants during these fests.

Meenakshi Pamnani, a well-known fashion blogger, who enjoys going to Garba nights, shares, “The atmosphere at these events is electric, and Bollywood movies have contributed a great deal to their popularity. And because so many people attend these events, one cannot take styling lightly. If you are planning to attend a Garba night this year, make sure you opt for a colourful outfit. You can match it with junk/metal jewellery. The best part is that you can just go all out with colours and mix and match as you wish.”