Dome of light to delight visitors to Louvre Abu Dhabi

With the Louvre name on the Abu Dhabi museum, the outcome had to be grand 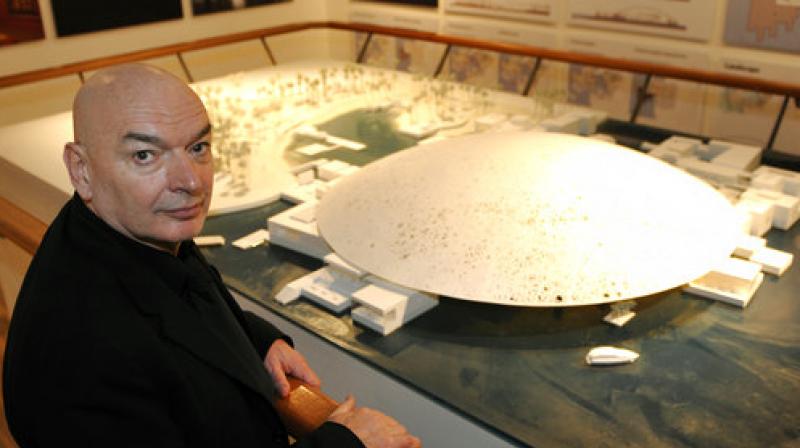 Paris: Sunshine and starlight will dance over visitors to the Louvre Abu Dhabi Museum when it opens in November, filtering through a huge dome that appears to hover over land and sea.

The aery dome, held aloft with four massive but invisible structures, has an earthly weight of 7,500 tons - 200 tons more than the iron structure of the Eiffel Tower. It is a defining feature of the new museum on Saadiyat Island, a salty flood plain of the Persian Gulf, which sits half in the water, half on land.

Jean Nouvel, the renowned French architect behind the project, said he wanted to build the museum "in relation to the country it's in," using innovative techniques to capture the sands, the sea, the horizons of the "enormous sky" and the culture of Abu Dhabi, which serves as capital of the United Arab Emirates.

"I'm a contextual architect ... buildings should know where they are," Nouvel said as he showed off the final mock-up in the Paris atelier where the project was born. Nouvel was visibly proud of the engineering and artistic feats behind the museum which, with its 55 buildings scattered around the dome, was built to resemble an Arab village.

With the Louvre name on the Abu Dhabi museum, the outcome had to be grand - even though the Louvre Museum makes clear this is neither a branch nor an annex. Instead, it is a joint venture between the governments of the United Arab Emirates and France, with the UAE paying the Louvre for use of its name for 30 years.

Art works from the Louvre and other French museums will make up half the collection of 600 works distributed over some 6,400 square meters in galleries around the site.But it is what Nouvel calls the "rain of light" from the dome that is the focal point of his creation. The splashes of light are designed to skip about the museum interior, changing shape and place as the sun rises and sets.

Inspired by the sunlight glinting through palm trees and shadows cast by fronds, Nouvel's architectural and engineering team devised a system of interlocking geometrical shapes - on eight layers of cladding within the dome - to produce openings for sunlight to peek inside and fall in ever-changing patterns throughout the museum.

"It is the apparition of these spots (of light) that gives a consciousness of time, of the passage of time, of eternity," Nouvel said at a recent meeting with the Anglo-American Press Association in Paris. The dome, which measures 180 meters (590 feet) in diameter, also creates a micro-climate that helps protect visitors and art works from the blazing sun, along with the stone floor and vistas of water.

Nouvel said he was aware of reports on the mistreatment of immigrant workers in Abu Dhabi, including those working on the museum site, and that he personally checked the workers' living conditions and equipment. A 2015 report by Human Rights Watch said hundreds on Saadiyat Island were deported or lost visas for going on strike. Abu Dhabi authorities said one museum worker was killed in a 2015 accident, while another died last year of "natural causes."

Nouvel said he saw workers' living quarters. "For me, it was somewhat better conditions than what I find working in other countries," Nouvel said. "We saw no problems. That's certain." The Nov. 11 opening is about five years late. Nouvel and his associate, Hala Warde, attributed the delay to the Arab Spring democracy revolts, when all construction in the region was halted and work on the museum took a more than 18-month rest.

However, Abu Dhabi's strapped finances after bailing out Dubai proved a financial squeeze, along with plummeting oil prices. Work on the planned Guggenheim museum down the coast remains at a standstill. Asked if they worry about what will happen in 2037 - when the contract ends and the Louvre name could disappear - Warde joked: "Our museum (design) is built for 100 years." Nouvel took it further, noting the museum will furnish an education for the young and art for all. "It's like a cathedral in our era."