Two photographers from UAE travelled to Kerala and back recently to connect expats to their families back home. 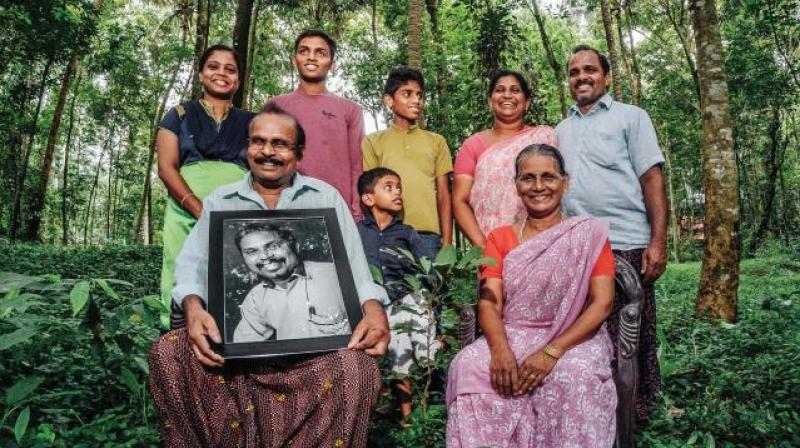 Baiju’s family with his photo.

In the age of social media, celebrations surrounding Valentine’s Day, Mother’s Day and Father’s Day are usually confined to the internet. Some even feel embarrassed to log onto social media on these days. This is why two youngsters from Abu Dhabi, Waleed Shah and Nikith Nath, set out to do something real this year’s Father’s Day. The two photographers came up with the ‘The Father’s Day Project’, as part of which they travelled to Kerala with the portraits of nine fathers working in Abu Dhabi and delivered these framed prints to their families. Not only that, they also travelled back to Abu Dhabi and gifted these dads the framed prints of their families.

The love for photography is what they both have in common. Waleed and Nikith left successful careers in the oil industry to pursue their passion of becoming full-time photographers. They developed a good camaraderie after working together on various assignments. 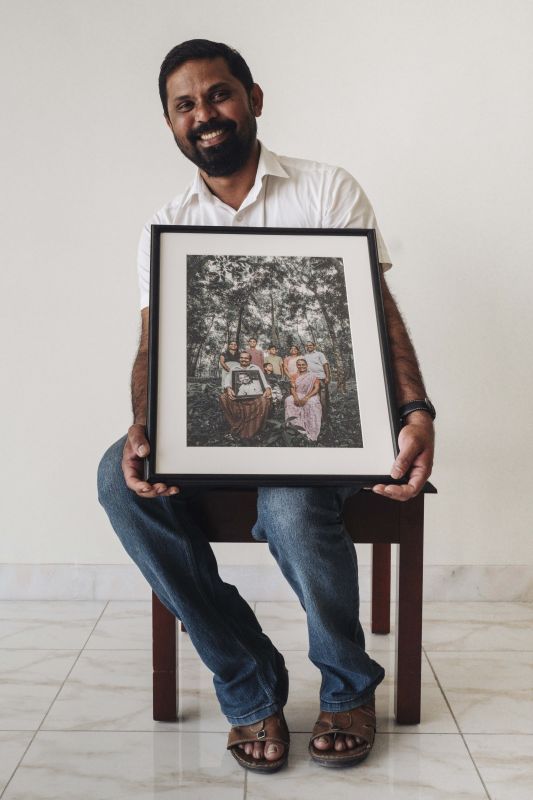 Waleed, who travels to different destinations to escape the scorching UAE summer, wanted to do something different this time. Incidentally, Father’s Day was falling around this break.

“Indians constitute a major part of the population of UAE, out of which Keralites are many. So I decided to work on this project and found some fathers in UAE. Luckily, Nikith was in Kerala that time and I discussed the idea with him. That’s how the project got on. So choosing Kerala was part of fate,” says Waleed.

“Out of the Keralites working in UAE, most work at construction sites. They toil for their families to achieve the dreams they brought with them. Most of them don’t even see their families for two years. So we wanted to tell their stories and that’s how the project came to life,” recalls Nikith on how they chose Gigi Thomas, Benny, Jomy, Baiju, Devassy Thomas, Binu, Joy, Daniel and Anil Kumar for the project.

When they started out to gift a special Father’s Day to these nine fathers, they had no idea how fulfilling this experience would be. Every father and his family were special.

“They were initially reserved when we went to take the portraits as they didn’t know who we were or what we were doing. But when we got back with the photo frames of their families, they were smiling and emotional. Visiting the fathers and their families was a remarkable experience, emotional too,” says Waleed.

Nikith was emotionally connected to the project from the beginning. He grew up hearing stories of his dad’s first job and the dreams his dad had while landing in UAE, leaving his mother home to go abroad for work.

“Unlike my father, these fathers we met don’t have the privilege of bringing their families here or even visiting them often. That was the inspiration behind undertaking this project. I had only heard stories about expats toiling away and not being able to see their families for years. Also, these interviews and documentaries only showed the stories of the men working abroad. Binu, one of the fathers, was a whole new person when we had met him at his house in Kollam; it was as if he got his soul back when he was with his family. It was pretty much the same when we had interviewed the other fathers. Every family had a touching story, mothers who miss their sons, wives who miss their husbands and children who miss their fathers. It made me realise how privileged I was to have my father beside me all through my childhood,” he says.

They both have different versions while talking about the experience in Kerala. Waleed really enjoyed his time in Kerala. He says Kerala taught him a lot, especially about family values. “People tend to be reserved at the beginning but when they get close, it’s an amazing feeling. All the family members are so close here. I loved riding around town; the food was also great,” he says.

Despite being a Keralite, the only connections Nikith had with Kerala were his summer holidays and the four years he spent studying at NIT Calicut. “I’m actually a tourist in my own place. This trip helped me explore Kerala,” he says.

At a time when people travel in cabs, it was quite interesting that these two toured Kerala on motorcycles. Their love for riding motivated them to take up such an initiative. Waleed believes riding keeps a person connected to the road and the country. “It’s also the best way to observe the topography and make stops to have cookies or biriyani,” he says.

The project has been getting tremendous response. Waleed is happy that many publications in India, UAE and Egypt had featured their project. They are getting considerable shares online too. “While we were on our trip to visit these families, we had been updating our followers through Instagram and we were getting great support. When the project was written about, the response was mind blowing. It was then that I personally understood the grandeur of the project and the initiative. I had got personal messages complimenting us for bringing smiles to these families,” adds Nikith.