A tree protection campaign aims at prising out nails embedded in trees in a bid to improve their lifespan and the green cover of the city. 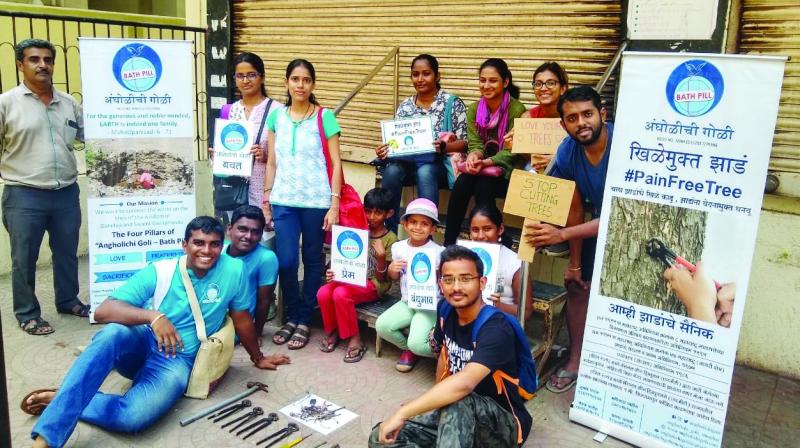 This is what members of the NGO, Angholichi Goli, founded by Madhav Patil, are trying to prevent. As part of their ‘Nail Free Tree’ campaign, which works towards saving and protecting trees, the members sent a letter to municipal corporations of several cities last month, urging them to take steps to prevent the hacking off of branches and the ritualistic tying of threads around Banyan tree trunks during the festival.

This June, married women across the Western Indian states of Maharashtra, Gujarat and Karnataka will pray for the well being of their husbands on Vat Purnima, a three-day festival during which women offer puja to Goddess Savitri, fast and tie a ceremonial knot around a Banyan tree.  Post the festival, which honours Savitri’s devotion to her husband, Satyavan, whom she saved from Yamaraj, the God of Death, Banyan trees across the city will wear an additional skin made up of threads, while some might even wind up with chopped off branches.

This is what members of the NGO, Angholichi Goli, founded by Madhav Patil, are trying to prevent. As part of their ‘Nail Free Tree’ campaign, which works towards saving and protecting trees, the members sent a letter to municipal corporations of several cities last month, urging them to take steps to prevent the hacking off of branches and the ritualistic tying of threads around Banyan tree trunks during the festival.

“The accumulated layers of threads damage the bark of the tree and eventually, cuts off water flow by damaging underlying tissue in the bark,” explains Tushar Warang, Mumbai co-ordinator of the Nail Free Tree campaign. But this is just one of the steps taken by the group to protect trees in and around Maharashtra. The crucial goal of their campaign is to free trees of nails, stapler pins, iron rods and other objects embedded in them.

Just last week, the group organised an event that invited Mumbaikars to participate in a nail-removing walk, where participants were informed about how inserting objects into trees harms them, encouraged to participate in a compound cleaning activity along with actually pulling out nails from trees with appropriate equipment. Another such event will be organised on June 5 this year — World Environment Day. Though the group has been actively organising activities like these in the city from April 2018, Tushar says that it hasn’t been enough.

“Even though the National Green Tribunal’s 2013 order made it illegal to use trees to display banners and advertisements, people continue to do so, as tree trunks form ubiquitous, cost-free canvases for advertising. Many individuals, especially shopkeepers still attach posters, flyers and advertisements on trees by driving nails or stapler pins into the tree’s trunk. Some even insert black magic paraphernalia, like lemons, dolls, and horseshoes, into trees. These nails tear holes into the nervous system of the tree, which reduces the tree’s ability to manufacture food for itself, causing its lifespan to decrease. It also reduces the tree’s oxygen-giving capacity,” informs Tushar.

Till date, the group has managed to prise out around 5,700 nails from approximately 2000 trees, using a nail extractor, a hammer, and a screwdriver. Post removing the nail, raw wax is stuffed into crevices and holes to prevent insect infestation, as the wax acts as a deterrent to insects without negatively impacting the tree. But apart from nails, there are other aspects that need to be focussed on. “Apart from nails, tying wires around trees, hanging lights, or even concretising the vicinity of the tree is harmful for it. We are creating awareness on all these fronts,” adds the nature enthusiast.

According to the Indian Institute of Science, Mumbai had a green cover of 35 per cent in 1975; today, it is less than 13 per cent. So, the tree count is close to 30 lakhs, but according to Mumbai’s population of 1.84 crores (as per the 2011 census), our tree count should be 80-85 lakhs,” he says and adds, “In India, trees are considered sacred and we even pray to them. It’s ironical then that we do nothing to preserve and protect them.”