Fresh from the local 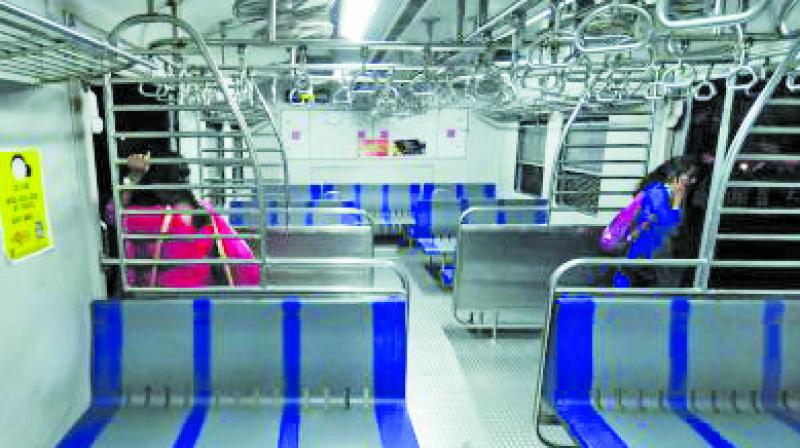 The sight in 9.30 pm CST-Andheri-bound Harbour Line local is usually bereft of anything remarkable.

The sight in 9.30 pm CST-Andheri-bound Harbour Line local is usually bereft of anything remarkable. The fluorescent lights inside the light green compartments shed uneven shadows on unfamiliar faces — mostly exhausted. One would like to think that there is someone waiting to open the door for them. For Sharda Madhukar Boba, an angry husband is waiting at home, but she is happy. It’s out of affection. So are her son and his wife, with food ready. “I know what will ensue once I reach home. Their father is going to create a huge ruckus tonight. He gets very angry on the days when I go home late,” says Sharda. On normal days, she usually gets home by 5 o’clock. Sharda is fish-seller from Versova. Every alternate day, along with many others, she leaves home as early as 4 am in the morning in hired trucks and gets dropped at Dongri Bazar.

For someone who started her day so early and considering she has been working almost two shifts alone, Sharda betrays no sign of fatigue. “The work is too demanding, extremely rigorous, but honestly, there’s enough money. On any given day, one can earn between Rs 2,000 to Rs 3,000.” But today has been a great day for Sharda. “Since Ramadan is here, Muslims bought a lot of fish from us in the evening. Every year, during Ramadan, we end up going home late,” she says. “Muslims know their fish very well — they often buy a lot. On the other hand, Marathis don’t know how to eat fish,” she says. Sharda’s accusatory tone, made her co-passengers giggle.

Meanwhile, two street urchins wearing a similar hydra-like haircut picked up a rock lobster from her blue crate. “Are they alive?” one asked. “Put them back!” went a swift and shrill order. The half-dead lobster was thrown back splashing few filaments of water on the floor.

Her sun-tanned dark skin was a perfect foil for her gold jewelleries in her hands, earlobes and nose. Her husband is in the military. “Earlier, he would get transferred to various parts of the country. But now, he is posted in Kandivali (Military Camp),” she says, adding, “Next month, he is going to retire.” After a short pause she further adds, “He is turning sixty.”

God has been fair to her she says. “I have two daughters and one son. All of them are doing well.” Her son has a job at the Airport Authority of India, and her daughters are married off. “What else can I want?” she answers in a rhetoric.  “My kids and ‘their father’ often ask me to quit all this. But I cannot just sit at home. How long can one watch TV?” she asks. “Moreover,” she says, “these train journeys keep my blood flowing.”

The 58-year-old has lived her life in Versova koliwada and has been working since she was about 15. “People come to the city from their villages. But for me, this city is my village.” The train runs past glistening railway tracks as a miasma of fish and saline water turned surprisingly bearable.