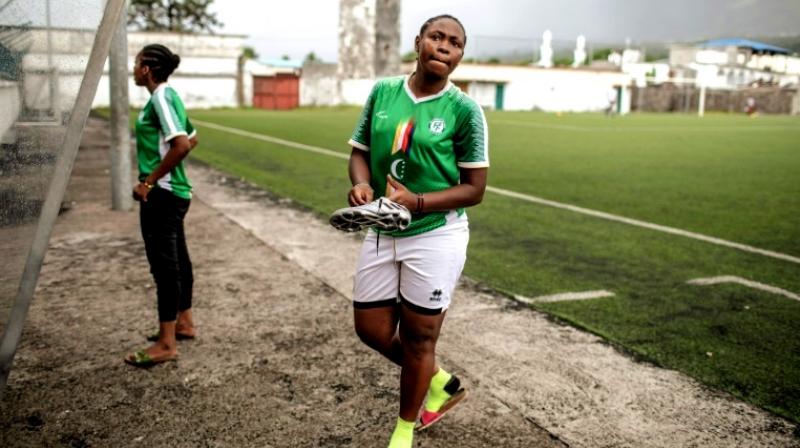 Moroni: Sitting beside the football field, Armelle Sylva pulls thick sport socks over her feet and painted toenails before putting on football boots. She then carefully removes the veil that has been covering her hair and folds it into a backpack.

The women of the FC Mamans football team have gathered for practice at the municipal stadium of the Comoran capital Moroni, braving a fierce tropical storm battering the city. Under the watchful eye of their coach, Stephane Aboutoihi, the team practises passing and ball control and plays team-building games.

Sylva pauses for breath, hands on her hips and rainwater dripping off her long hair, and breaks into a smile. "It's a passion I've had since I was small. When we play we're like a family -- more important than your home village or religion, we enjoy ourselves. We're fortunate," says the 23-year-old striker.

But Sylva had to fight hard to be able to join the "family" in Comoros, a Muslim-majority country where most women would only go outside veiled and those wearing shorts are frowned upon. "They told me: 'You're a girl, you're not here to play football, you're here to play with your children at home. But I insisted, (though) it got me in trouble with my family and my uncles," she says.

Hairiat Abdourahmane, 24, has also had to overcome her family's concerns and the religious taboos around women in sport to eventually don the green jersey of the national team. Her teammates call Abdourahmane, the team's captain and centre forward, "Maradona".

Abdourahmane channels her grit and determination, blasting a volley of balls at the goal which is, for this practice session, defended by a man. "My dad didn't want me to play. He finally accepted it when I joined the national side. He doesn't come to watch me (but) when they're on the radio, he listens out for my name," the young nurse says.

Women's football started from nothing 15 years ago and has slowly gained in popularity on the poor Indian Ocean archipelago. The first club, created in 2003, was FC Mamans (Mums FC) and was subsequently joined by 17 others from across Grande Comore, Anjouan and Moheli islands.

They face off in an annual championship at which the standard of competition is high and the women of the national side recently won the Indian Ocean title.

"Women's football has come a long way in Comoros. There's a national team that represents the country. It's become a serious venture in many people's eyes," says the club's president and basketball league boss, Sultan Said Ali.

Thanks to the income earned from FIFA, sports officials have begun to train referees, coaches and managers for the women's game. "The idea is to develop all of that. More games, more training, more tournaments, it's going to cost more money but the girls deserve to be helped, they are passionate," Sultan says enthusiastically.

The game's backers and players are hoping that the next Women's World Cup in France in June will broaden the appeal of the women's game in Comoros. "It's a golden opportunity. It will show the world that girls can play as well as boys," says Aboutoihi, who as well as being FC Mamans' coach is national football director.