His ministers chipped in saying Charles Darwin was wrong about evolution since no one saw man emerge from monkey. 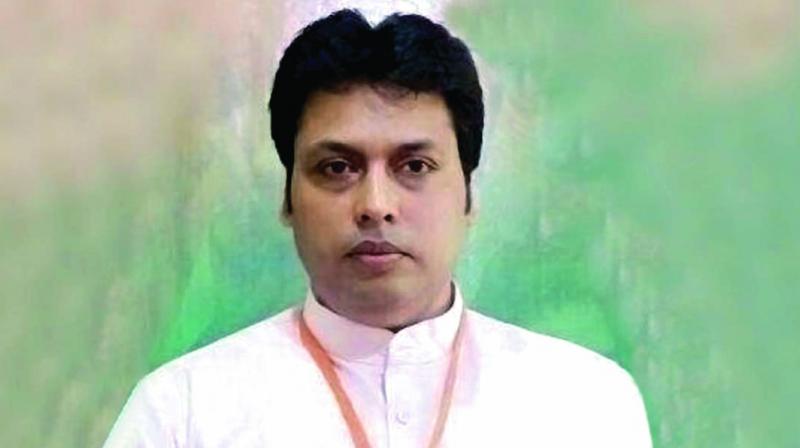 The fable has it that the charioteer Sanjaya spoke of the war to the king through his divine vision.

Twitterati had a hearty laugh when Tripura CM Biplab Deb said the internet helped King Dhritarashtra’s advisers track developments in the battle between the Kauravas and Pandavas. “Indians have been using internet since the times of Mahabharata. This is the only explanation of how Sanjaya could narrate the entire tale of the battle of Kurukshetra to blind king Dhritarashtra without physically being present at the event,” he said. “Internet existed long ago in our country. It may have got lost in the middle but India was top in technology since the times of Mahabharata.” 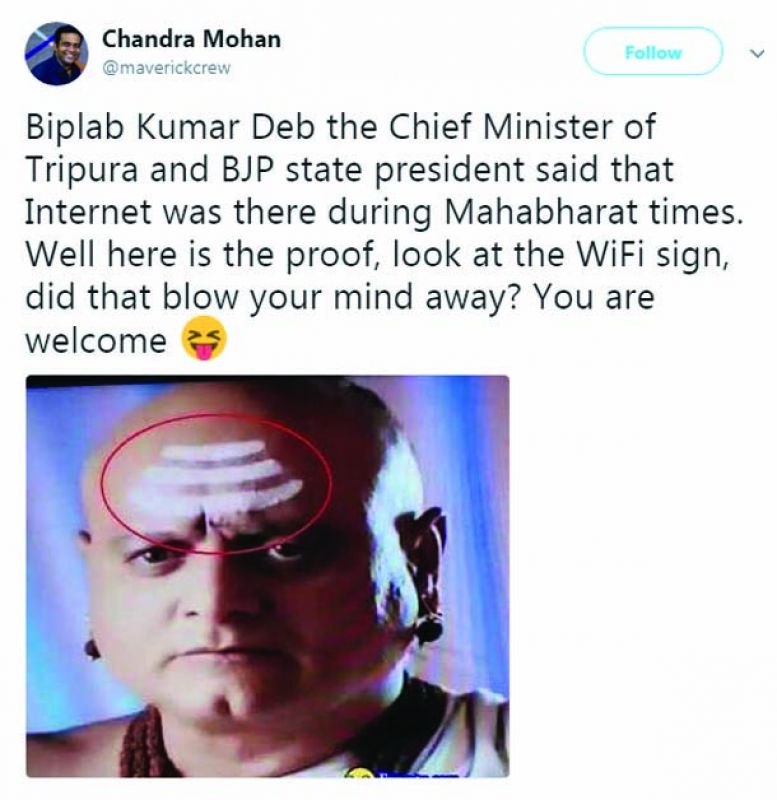 The fable has it that the charioteer Sanjaya spoke of the war to the king through his divine vision. But BJP leaders have this habit of talking of ancient India as the fount of all virtues, technology, devices like Pushpak Viman — a kind of aeroplane — and now internet and satellite communications. They have been expounding all sorts of theories about the great civilisation in the Indus Valley and after. Even the Prime Minister said there was plastic surgery in those times. His ministers chipped in saying Charles Darwin was wrong about evolution since no one saw man emerge from monkey.

Where Biplab Deb outdid the others in his fantasising is he triggered the imagination of Twitterati into offering all kinds of humorous takes on the subject of Wi-Fi in Mahabharata. We have not had more of a laugh since the silent movies of Charlie Chaplin introduced slapstick humour into the country.

This raises a few questions. Why didn't Abhimanyu ask Quora how to escape the Chakravyuha? Why did Sanjay narrate the Kurukshetra War when Siri could have done it? Also, Krishna really should have streamed the Bhagavad-Gita on Facebook Live. #Mahabharata

I only wish that they'd had the internet in the times of the Ramayana. Then Hanuman could've saved a lot of trouble carrying that whole mountain by just searching "sanjivani herb" on google images. #InternetMahabharata #Mahabharata.

Of course the internet existed during the Mahabharata era. That Tiimes How handle is the one that posted the "Aswatthama is dead" tweet. And how do you think the Pandavas went incognito in their final year of exile? They deleted their Facebook and protected their twitter account

BJP's TripuraCM BiplabDeb echoes Modi&claims that internet& satellites existed in time of Mahabharata! Remember Modi claiming that we had plastic surgery in ancient India since Lord Ganesh's trunk was engrafted by plastic surgery!Must be given Nobel prize!

In the mahabharata had the pandavas shared their wifi password to the kauravas, then the kurukshetra war could be avoided

Bumped into Bhim (of mahabharat). He said he was going to buy a new mobile as he does not fit into one selfie frame!

Chief minister of Tripura Biplab kumar Deb said that internet exist during Mahabharat times So was he communication Minister there at time? I don't understand what kind of weed these ministers eat? Thankgod he didnt said that he gave training to Bheem in his Gym

Tripura CM Biplab Deb: "Indias has been using internet since ages. In Mahabharata, Sanjay was blind but narrated all happening in the battlefield. This was due to internet and technology. Satellite also existed then." -Cocktail of exaggeration, wishful thinking and nationalism

Ola #CancelledOlaRide & #CancelledOlaCab as they wanted me to use Mahabharat version of Internet offered by @BjpBiplab . Even I have pen drive of that time

More technology in Mahabharata: 1. Arjun met Draupadi on a Facebook page called 'Fish Eye vs Arrow Jokes'. 2. The thorn-bed Bhishma Pitamaha slept on was funded on Kickstarter. 3. Men disrobing Draupadi to punish her for laughing publicly was Twitter

I don't know about you but way back during Mahabharat times, me and my buddies used to order gas online... Internet connection was mad fast in those days. Cylinders used to be delivered by Pushpak Vimanas