These researchers are inventive in terms of christening their startups and products. 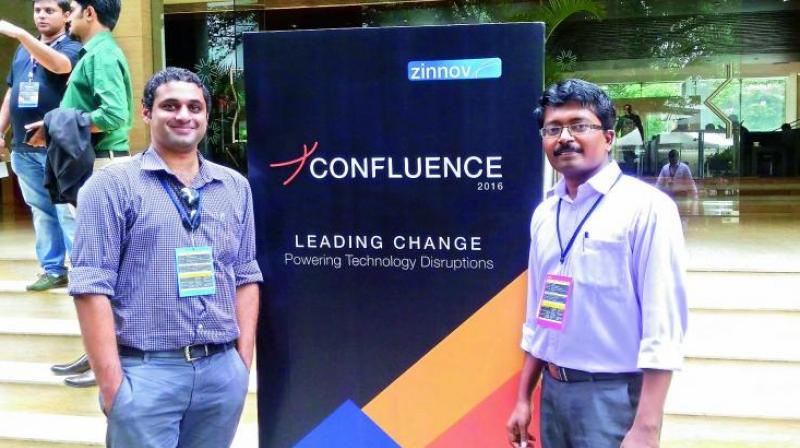 For visitors like famed author-politician Jeffry Archer or millions of commuters, Bengaluru’s traffic snarls are an ordeal. The odd men out, however, are Dr Santosh Bhargav and Dr Ramnath Babu, co-founders of a startup, BendFlex Research & Development Pvt Ltd. They finish their morning and evening meetings and business calls as they inch their way to work and home in a pooled car. The commute has helped them discover an idea to end traffic pileups with the same approach they employ to roll out unique products: topology optimisation or simply connection of dots!

Dr Santosh Bhargav and Dr Ramnath Babu, in their early 30s, are among the new throng of alumni of Indian Institute of Science, Bengaluru, the alma mater of many a leading scientist, launching startups to produce gadgets which are inexpensive, hold great promise for rural India, and intended to meet societal needs. And, as they make the most of a recent decision of IISc’s Governing Council to revise its policy on intellectual property rights and entrepreneurship, they will, perhaps, silence critics who have questioned this premier institute’s contribution to help solve problems unique to the country.

Some of these startups have already attracted global attention. For instance, Prof Sanjiv Sambandan, an assistant professor at the department of instrumentation and applied physics, and his team, who set out to find a solution to shortage of potable drinking water through their startup, Openwater.in, won the Google PitchFest at Zurich last year for the new water purifying system. SciDogma Research, which developed an automated microscope capable of detecting malaria parasite from a blood smear, finished the runner-up at Stanford Medicine X-health care design competition in 2016. This device is the brainchild of Satya Tapas, a former post doctoral fellow in the lab of M.R.N. Murthy, professor, biophysics.

For most alumni, it’s the thrill of turning results derived in their labs into novel devices. As Dr Ramanath Babu explained “the independence to express thoughts and ideas and to push them on our own which we will not be able to do as employees even in a reputed company though we could have taken home fat pay cheques.”

Though this duo is happy breaking even month on month, Dr Santosh Bhargav remarked that their team is betting big on a couple of microscopic tools which could make a major difference in medical diagnostics: one to prove whether an IVF procedure for test-tube babies will yield positive results, and another to diagnose a variety of diseases from malaria to dengue and even cancer. These researchers are inventive in terms of christening their startups and products.

Prof. Navakanta Bhat, chairman, Centre for Nano Science and Engineering, and his former students, have named their startup PathShodh (Path for pathology and Shodh for Research). The first product “AnuPath” (or molecular diagnosis), a table-top contraption which can diagnose diabetes and eight other ailments related to the kidney and liver with a single drop of blood, will hit the market later this month. The price tag: Rs 50,000 when sold to primary health units and NGOs, but expensive for big hospitals. “It can be used for tests in remote areas and the results transmitted through bluetooth to experts,” says Prof. Bhat.

The number of start-ups will swell by the end of the year thanks to a catalytic role played by IISc’s Society for Innovation and Development in incubation of ideas and often even providing space for start-ups. Perhaps, one of them could transform into a global giant like Facebook, Google or Dell, all of which started in universities.

Startups of alumni of IISc