Celebrities repeating clothes in the public eye is the new way of furthering conversations about making environmentally- sustainable fashion choices. 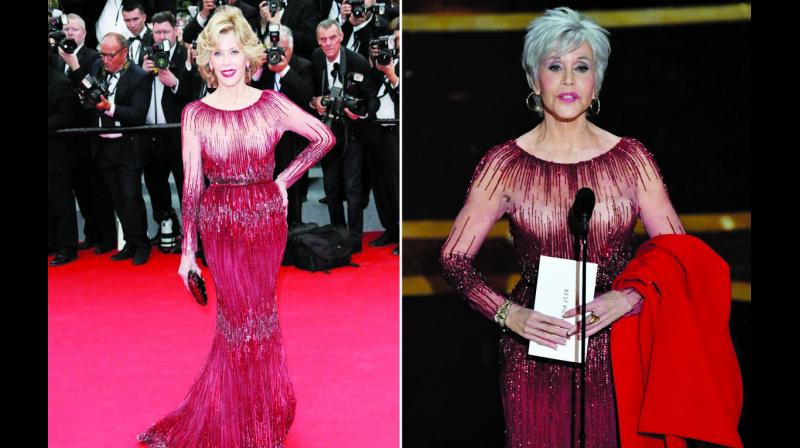 In her two-day visit to India, Ivanka Trump, White House senior advisor, who was part of the high-powered US delegation including her father President of USA Donald Trump, surprised the nation with her sartorial choices. While her Anita Dongre white sherwani with pants and Rohit Bal’s anarkali suit left the fashion police pleased, it was her midi blue dress with red floral prints that left people in awe of her.

Wearing the Proenza Schouler’s baby blue viscose georgette dress with a V-neck on Day 1, Ivanka made a bold statement of sustainability, as she had already worn the dress on her trip to Argentina last year. Shockingly contradicting her father’s infamous views on the environment, Ivanka, by repeating the dress in the public eye has joined other famous people to make sustainable fashion choices at a time when the fashion industry in the second most polluting industry in the world. “People have a ridiculous trend of wearing something once, and never wearing it again. What Ivanka Trump has repeated is from her personal wardrobe; I think it’s commendable to repeat clothes from a personal wardrobe. Kate Middleton also recently repeated a gown, which she had worn years ago. That’s how it should be. Using clothes carefully and cherishing them is the best thing you can do for sustainability,” says an impressed Mumbai-based fashion designer Nachiket Barve who owns an eponymous fashion label.

Since the celebrities and public figures are often accredited as larger than life personas, maintaining a buzz with fashion choices becomes part and parcel of staying relevant. According to fashion designer Nivedita Saboo, who also owns an eponymous fashion label, celebrities should use their popularity to further conversations about sustainable lifestyle and choices. “It is a great idea for celebrities to repeat clothes because they are the trendsetters and the influencers of today, and if they are repeating their clothes, then they will also encourage people to do so. I would encourage celebrities and influencers to repeat their outfit because of it definitely a sustainable way to look at fashion, and how to slow down fashion,” says the designer.

Earlier this year, even before winning the Oscar for Best Actor, the Joker fame Joaquin Phoenix was already declared a “winner”, as he made a vow to repeat his Stella McCartney tux this award season. Taking to the social media platform Instagram, the internationally renowned fashion designer who owns the eponymous fashion label had said: “This man is a winner… wearing custom Stella because he chooses to make choices for the future of the planet and all of its creatures. He has also chosen to wear this same Tux for the entire award season to reduce waste. I am proud and honoured to join forces with you, Joaquin, keep inspiring and keep shining your light x Stella.”

While Joaquin was lauded for making an environment-conscious the decision, the experts weigh in if it’s actually a sustainable decision to repeat clothes on the red carpet. Elaborating on it, Barve explains, “When you talk about people dressed on the red carpet, a lot of clothes are something which is loaned by a brand to a celebrity, so repeating it does not really do much because it’s not really a garment which is specifically made for them. The clothes get picked from runway samples, so they are anyway a part of a sample portfolio.”

Therefore, only in the instances where the garments purchased by the celebrities are worn again, can we make a statement about sustainability.  Furthering that sentiment, Hollywood legend Jane Fonda and the versatile actress Cate Blanchett are true winners of this cause. The Grace and Frankie star, who participates in weekly climate change protests, vowed to never buy a lavish piece of clothing and standing by her words, the actress repeated her 2014 Elie Saab red gown to this year’s Oscar ceremony. Cate, on numerous occasions, has fished clothes from her wardrobe to wear it to high-end events. Talking about repeating garments to The Hollywood Reporter, the actress had once said: “Particularly in today’s climate, it seems willful and ridiculous that such garments are not cherished and re-worn.”

For Nivedita, repeating clothes is not only a nod to sustainability but also to craftsmanship. “It’s not only paying huge respect to sustainability but also having a connection to the craftsmen who have put so much effort into creating that garment. I think it’s a great idea.” She further elaborates that repeating not only gives impetus to celebrities to recycle garments but also their accessories. “When a celebrity repeats something, it creates inspiration for a lot of others who are so scared to repeat their clothes. However, I also understand that our celebrities have a lot of pressure in terms of not having to be seen in the same outfit again, I really think it’s each to its own,” concludes fashion stylist Eshaa Amiin.