Instead of getting upset, Moonbeam says it is "very beautiful" when male fans hurl insults at her. 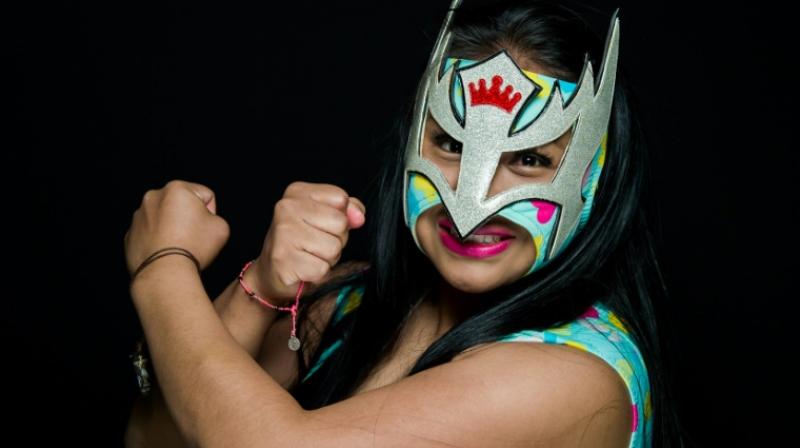 Moonbeam, a 42-year-old mother of three, says she loves fighting in mixed matches, which she sees as a "power struggle" (Photo: AFP)

The crowd goes wild as the masked wrestlers toss each other around the ring in colorful spandex.

But this is no ordinary Mexican "lucha libre" match: it is the "War of the Sexes," in which three women wrestlers battle three far bigger men.

Mixed matches like this, which emerged on the wildly popular pro wrestling scene some 20 years ago, could be a metaphor for gender relations in Mexico -- a country with a deep tradition of machismo, where women are fighting for equal rights even as thousands of them are raped and murdered each year.

"Get back in the kitchen, you damn hag!" yells a fan in the stands in an expletive-strewn outburst, as a wrestler called Moonbeam, decked out in a sequined leotard and tall boots, throws a left hook at her hulking opponent, Nazi Warrior.

Instead of getting upset, Moonbeam says it is "very beautiful" when male fans hurl insults at her.

"It means you're doing a good job. You're provoking them and giving them an outlet for their stress," she says.

"They take out their frustration by yelling at you," instead of shouting at or hitting their wives when they get home, she tells agencies.

Moonbeam, a 42-year-old mother of three, says she loves fighting in mixed matches, which she sees as a "power struggle."

"We want to show the public and our opponents that we can do this too. You don't have to be a big, strong man. We're skilled, we know how to fight a match, and we can beat them."

Her record backs her up: she has beaten nearly 70 men in her 15-year career.

Lucha libre, one of Mexico's most popular spectator sports, falls somewhere between actual sport and entertainment.

With its outlandish masks, costumes and characters, it packs more than a little spectacle. But the results are not predetermined, insist wrestlers like Moonbeam and her fellow "luchadoras" Melisa, Princess Legna and Lilly Star.

And the body blows can be all too real. The women all bear battle scars: bruised arms, scraped legs, back injuries.

They also endure sexism and criticism -- sometimes from their own families -- for pursuing a "masculine" sport.

"Four out of five matches on every fight card are for men," says Princess Legna, wearing a turquoise mask.

There are rarely separate dressing rooms for women, and "sometimes you can feel (the male wrestlers) sexually harassing you with their eyes," she says.

Nazi Warrior -- who insists he chose his name because it "sounds scary," not for ideological reasons -- says he tries to be "less rough" in the ring when he fights with women.

Violence against women "is OK, but only up to a point," he jokes, before climbing into the ring with his own mother, a fellow wrestler who goes by the name Swastika.

Moonbeam's husband and coach, fellow wrestler Gabriel Martinez, says he gets upset when he sees her getting hurt in the ring.

But "it's her job. It's part of the price she pays for doing what she loves," he adds.
Something different in life

Bathed in sweat, Moonbeam launches herself off the ropes at a towering opponent called Pambacin the Clown and knocks him flat.

She says she always knew she wanted something different than to be a homemaker.

Compared to many Mexican women, she was lucky: not only is her husband a feminist, her father also supported her unconditionally, she says.

"My dad gave me this career. He paid my gym membership, he bought my sneakers. He was always very proud of me," she says at the gym where she now trains, in a rough neighborhood in Mexico state, outside the capital.

The state has the worst statistics in the country for violence against women: 301 were murdered there last year.

Moonbeam never finished high school, like many women in her neighborhood. But she says being a wrestler "earns you a different kind of recognition than any degree."

"If you have your picture taken with a 'luchadora,' your family will say, 'Wow, you know her!'" she says.

"It makes you happy when people applaud and admire you," says Lilly Star, a slight 28-year-old who divides her time between wrestling and being a mom.

Martinez, Moonbeam's husband, says wrestling "helps women confront their fears, and their own husbands, who often oppress them."

He says the "luchadoras" he coaches often arrive at training sessions with cuts and bruises they got at home.

Wrestling "raises their self-esteem" and teaches them to defend themselves, he says.

"Violence isn't something we're proud of, but a woman who knows her place and knows how to put those misogynists in theirs? That's something to be proud of."

But wrestler Tania the Warrior, a white-haired veteran with 41 years in the ring, sees mixed matches as dangerous.

"We're trying to stop violence against women. What message are we sending to the audience when we put women up against men who are way bigger than them?"

It turns out not to be an issue for Moonbeam and company in this night's "War of the Sexes."

After enduring elbows, body slams and pulled hair, they manage to deliver a devastating blow to Nazi Warrior's stomach, winning them the match -- and a hail of boos and cheers from the frenzied crowd.