Guillaume Seznec was accused of killing his business partner despite there being no evidence of a body or weapon. 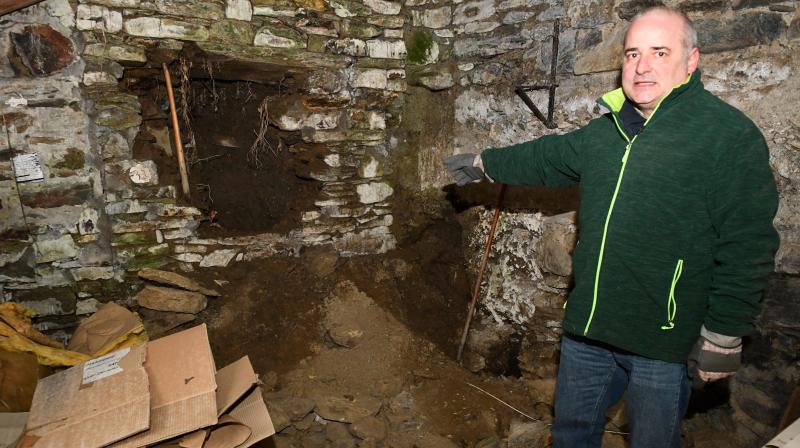 French author of a book on the Seznec case and coordinator of the searches Bernard Vilain, shows a hole in the wall of the cellar of the house where the Seznec family used to live in Morlaix, western France during an excavation operation in February 24, 2018 with the hope of finding the body of Pierre Quemeneur, who disappeared in 1923. (Photo: AFP)

MORLAIX, France: For nearly a century the case of Guillaume Seznec, accused of killing his business partner even though no body or weapon was ever found, has fascinated France as one of the country's most notorious legal mysteries.

Now, the discovery over the weekend of human bones at Seznec's former home in Brittany has sparked hope among his descendants and defenders that the truth may finally come to light. Denis Langlois, a former lawyer for Seznec's family, and author Bertrand Vilain carried out their unofficial dig in the cellar of the unoccupied house on the theory that the victim may have been accidently killed by Seznec's wife as she resisted his advances.

In May 1923 Seznec, a lumber merchant, travelled to Paris from the western town of Rennes with Pierre Quemeneur, a local official, to buy a stock of cars left by US forces after World War I. Three days later Seznec returned home alone, saying that after a series of car breakdowns on their way to the capital, Quemeneur had wanted to return by train.

Quemeneur supposedly sent a telegram from Le Havre saying he would be home "in a few days", but was never seen again. Police later claimed Seznec himself sent the telegram. Despite his claims of innocence his testimony was often contradictory, prompting a jury to sentence him to a life of hard labour in French Guiana.

'More will turn up'

Seznec was freed for good behaviour by Charles de Gaulle in 1946. He had refused in 1933 to seek a pardon, saying "only the guilty ask for a pardon". He returned to the French mainland a broken man, his wife and eldest daughter having died while he was in prison.

He was killed a few years later after being knocked down on a Paris street by a truck that fled the scene. He was 69 years old. Seznec fought all his life to have his conviction overturned, a campaign that continued after his death with the support of family members as well as lawmakers, judges and journalists.

Even the police inspector who led the case, Pierre Bonny, reportedly voiced his remorse at "having sent an innocent man to prison" shortly before he was executed for collaborating with the Gestapo during World War II.

The "Seznec Affair" became a source of fascination, spawning TV movies as well as a popular theatre show in 2010 based on the trial, where audiences were asked at the end of each performance to give a verdict. On average, 90 percent declared him innocent. But prosecutors have denied 14 requests to reopen the case since 1924, most recently in 2006.

That could soon change with the two bone fragments found over the weekend, which have been turned over to local prosecutors for an eventual DNA analysis. "More things will turn up. We thought we'd start finding things at one metre deep, but we found these on the surface," Vilain told AFP. "We had solid information, and a crucial witness. We weren't just digging on a whim."

In a 2015 book, Langlois claimed that Seznec's son Guillaume had recorded a conversation with his nephew in 1978, describing his version of events.

Guillaume, 11 at the time, recalled hearing his mother fighting off Quemeneur and then seeing him laying on the ground with the woman standing over him. "I think she had to defend herself and hit him in the head," Guillaume said, according to Langlois.

Besides Guillaume and his parents, only one other person, a housemaid named Angele, knew the truth. "We were made to swear that we would never say anything," Guillaume recalled. "Our hypothesis is that Pierre Quemeneur tried to take advantage" of Seznec's wife, who fended him off with a heavy candlestick, Vilain said.

Police have taken over the search at Seznec's house, which also turned up part of a broken pipe. Prosecutor Jean-Philippe Recappe said investigators were checking if the bone pieces -- one of which may be the top of a femur -- were indeed human and if so, from a man or a woman.