Badminton Champion P.V. Sindhu reflects on her Padma Bhushan award, which was conferred on her on Saturday. 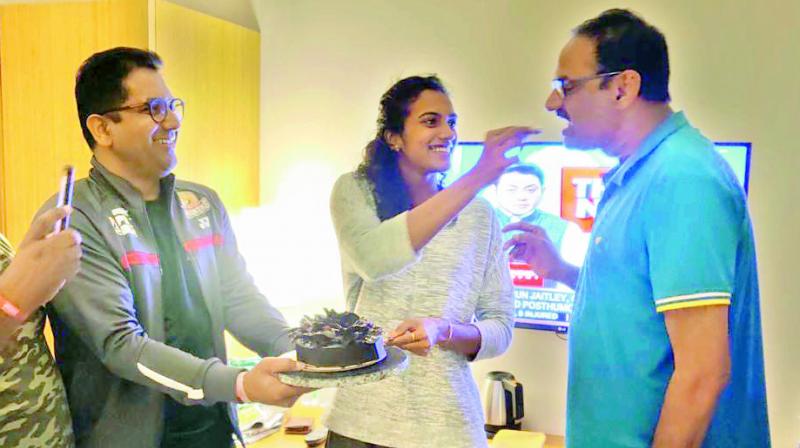 Sindhu and her father Ramana celebrating with Hyderabad Hunters team on Saturday.

It was a typical Saturday evening for the World Badminton Champion P.V. Sindhu as she wrapped up a team meeting with Hyderabad Hunters, her team for the ongoing Premier Badminton League happening in Lucknow. As she returned to her room, Ramana, her father, who’d until then been watching the news, shared the news with her that she had won the Padma Bhushan, the third-highest civilian award by the Government of India. “I was overwhelmed with joy on hearing the news,” describes Sindhu. “And on learning the news, my team, immediately got a cake to celebrate the moment.”

Describing it as one of the special moments in her life, Sindhu states that the award is the result of hard work and constant practice. “This award couldn’t have come a better time for me as the 2020 Olympics is around the corner; nothing boosts morale than such a prestigious award coming your way,” says the Rio Olympics silver-medallist ecstatically

“Padma Bhushan is such a great motivation and it has made me more responsible and fosters in me further determination to thrive on excellence.”

Even through her excitement, Sindhu pauses to thank the people she claims are behind her success —coaches, support staff, fans and all her well-wishers. “Also, I want to expresses my profound gratitude to the Sports Ministry, Badminton Association of India (BAI) and the Chief Ministers of Telangana and Andhra Pradesh for their support,” she adds. Even as a jubilant Sindhu celebrates, her father, Ramana, expressed his joy at her winning the award. “It’s not easy task winning the Padma Bhushan. Several others have worked at least as hard as she has to win such honours. So also, knowing that Sindhu won this prestigious award when she’s just 24 years old adds to all our pride,” Ramana says, even as he expressed his gratitude for all the love and accolades pouring in from all corners of the world.