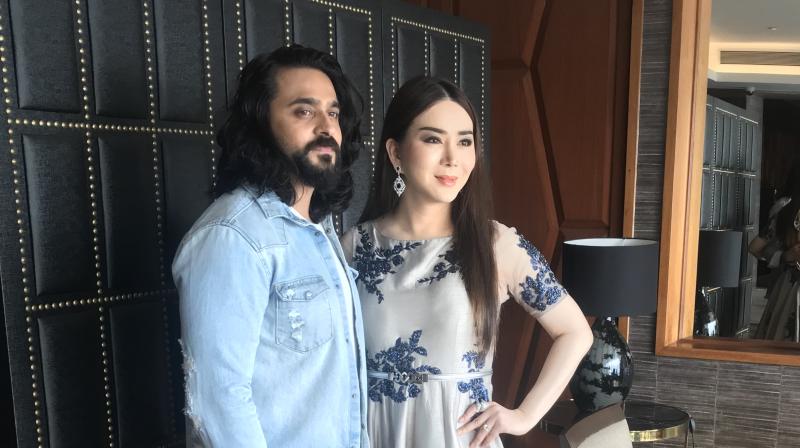 Actor Ashish Sharma along with Anne Jakkraphong Jakrajutatip during their meeting on Khejdi.

Actor Ashish Sharma, known for his varied roles on the small screen had recently invited Anne Jakkraphong Jakrajutatip, better known as the number one transgender millionaire in Asia to Mumbai for the signing of the deal of a global release of his latest movie based on the transgender community called 'Khejdi'.

In conversation with this correspondent, the duo shared their thoughts on the film, the LGBTQ community and how Khejdi and Anne's own journey are interlinked.

Based on the short story Sanjha, Khejdi is loosely a true story of a transgender under Ashish's own home production which he recently launched along with actor wife Archana Sharma called Rachayita Films Pvt Ltd.

Dismissing, at the very onset, the subject to be controversial, Sharma says that the seeds of the film were planted in him when he had read the short story a few years back.

"The story left a few questions inside me and I wanted to ask the same questions to the world." The actor further elaborates that everyone has a place in society, even those born in a certain way. "The question is not about controversy, but rather mirroring harsh reality that we wanted to bring forth," he explains.

While transforming physically from having a muscular physique to a more feminine one took him three months, the psychological transformation was what took him to his breaking points at times, he opines.

As for her opinion on Khejdi, Anne says that she found the film remarkable. The differences of the film from others, she felt was the way it connected dots and the way it promoted lesser known artists who have all done a stellar job. But most of all, Anne feels the movie excels in the sense that it gradually educated people to understand the development of each, character including Ashish.”

Voicing his views on the LGBTQ community that Ashish has sought to portray in Khejdi, the actor says that both India and the world have a lot to cover with respect to the community. He feels that foremost the community needs to 'embrace their own identity' and stop categorising themselves. The society, according to Ashish, needs to accept individuals as they are, and stop labelling them. Respect and acceptance are the two keywords, he ponders.

"In the remote areas, the community, without education or less with education finds it hard to accept anyone who is different from them," she explains, highlighting the need for education.

Anne's own journey towards becoming the richest transgender in Asia started when she was a young boy. Anne confesses that while other children might have wanted to be a doctor or teacher, she just wanted to be a millionaire. This is what helped her is seeing the doors of opportunity much before others had even gotten whiff of it and it helped her lead JKN Global Media to be in Thailand Stock Market in year 2017 successfully.

Commenting on how it might be difficult for youngsters grappling with their gender identity, Anne confesses that introspection is of paramount importance and once one feels ready they should seek counsel of elders and the more wise so that they do not live in confusion.

“Speak frankly to their parents, who you are and what you want. Remember being transgender is not a disease it only needs understanding and empathy.”

Focus on your studies and excel in them so that later in life you have more bargaining power.

If you have been bullied, inform your parents and teachers so that proper measures can be taken.

Stick with good friends who accept you, are ready to protect you and counsel you when needed.

Don't let anyone bully you without fighting back.

Sometimes stepping back is the best way forward. Don't put yourself in a situation, which, you might feel may go astray.

Ashish's reason for calling Anne also harbours on the fact that Anne has just started an organisation called LIFT which works for transgender children’s' education. Khejdi caters to the same thought and Anne’s own success story is inspiring in many ways to bring credibility to the movie.

As for his film and production house, Ashish says that he is in a great space now and is even ready with his next two scripts. “We will roll early next year and as an actor I have something very exciting lined up but too early to talk about it. It isn’t for television is all that I can say,” he lets slip.