A walk for women empowerment

Srishti Bakshi gets nostalgic as she enters Hyderabad as part of her mission to cover 3800 kms on foot from Kanyakumari to Kashmir. 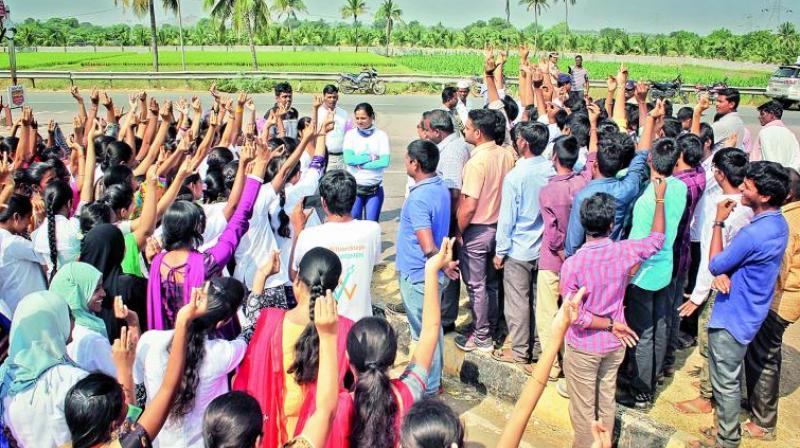 Srishti in action during a training session

A report about a mother-daughter duo gang-raped in India had left Srishti Bakshi, then a resident of Hong Kong, shaken to the core. She felt awful after realising that rape has become a common crime in India. It was the trigger that pushed her to embark on a mission to cover the 3,800 km stretch from Kanyakumari to Kashmir on foot over 260 days. She hopes to highlight the issue of women’s safety and empowerment through her ‘Project Crossbow’, as part of the UN’s Empower Women initiative.

The gutsy 30-year-old says, “I am not from the social sector, nor am I an athlete. But since I too have faced harassment issues, since I started out on my journey I have focussed on three elements to hit the bull’s eye — patients, people and precision. Since a crossbow is a silent and powerful weapon, I found the term apt for my movement.”

Srishti built her core strength by training in cross fit and weight lifting (20 kg) as part of her preparations for the cross-country walk. “My kit includes two pairs of shoes and t-shirts, rain gear, protein bars and nuts, kneecaps, sun gear, cap, and of course music to keep me charged,” she shares.

On the 70th day of her walk for a cause, she entered Hyderabad — Telangana being the fourth state on her itinerary. An alumnus of the Indian School of Business (ISB), class of 2011, Sristi says she feels nostalgic about coming to Hyderabad.

Ask her how the response has been, and she answers, “It’s been very encouraging,” adding that, “People have been giving me a warm welcome. They have been voluntarily participating in the village workshops and training sessions. I am educating them about actually putting things into action, and that voicing their opinion on social media is just not enough. The police and district collectors have also been helping me with accommodation arrangements.”

Her day typically starts at 5 am; and she walks till 1 pm before breaking for lunch. Her afternoons are spent conducting workshops till the evening. Before retiring for the day, she posts her day’s progress for her online followers.

This Dehradun-born, daughter of an army officer was initially apprehensive about language posing a challenge in reaching out to people. “But the people have proved me wrong. The reception I got in Tamil Nadu and Karnataka has kept me going. I realised that there may be economic differences and gender bias at the grassroots level too, which is why I have focused on soft issues like gender equality. And people are experiencing the change after initial interactions.”

She is quick to credit her husband for the success of her mission. “Without his support, I would not have come this far. He has always encouraged in all my endeavours.”

In fact, Friday marked their fifth marriage anniversary. Any regrets about missing an important day with her husband? “Yeah, on a tough day, I do miss him (smiles). But thanks to technology, we’re in constant touch. We know the importance of the cause we’ve championed, and so we were prepared for personal sacrifices,” she quips.