Woman hosts teen whom she accidentally invited for Thanksgiving

The woman had included what she thought was her grandson's number on a group text inviting some relatives to dinner. 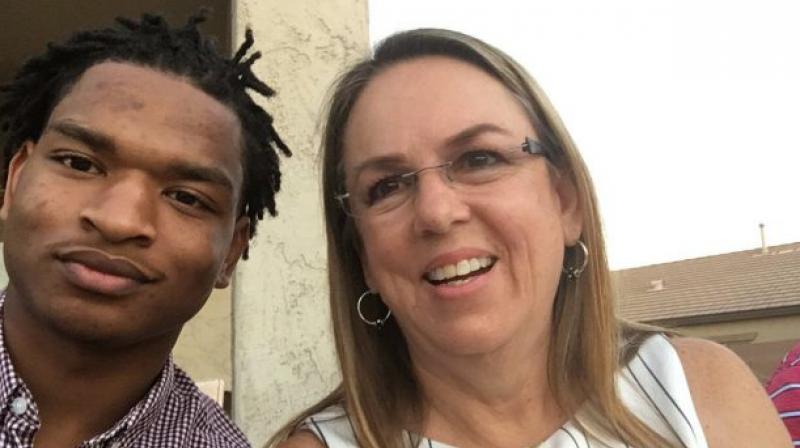 Mesa, Ariz: An Arizona woman who accidentally texted a stranger an invitation to Thanksgiving dinner made good on her offer, greeting the teen visitor with a hug and an oven full of food after their story swept through social media.

Wanda Dench prepped two turkeys and set up a long table in the backyard of her suburban Phoenix home Thursday before she and her family headed outside to wait for Jamal Hinton, 17, The Arizona Republic reported (http://bit.ly/2fyThMx ).

"I'm so happy you came," Dench said as they embraced. "I am too," Hinton said. The mix-up happened after Dench included what she thought was her grandson's number on a group text last week inviting some relatives to dinner. But he had changed his number and forgot to tell her.

Instead, the text went to Hinton. They realized the mistake after the two exchanged pictures, but Hinton asked if he could "still get a plate." Dench responded, "Of course you can. That's what grandmas do."

The exchange gained attention after Hinton posted it on Twitter. Dench's phone number was not hidden in the photos, so she learned how many people wanted a place at her table. She said about 600 people texted her asking if they, too, could grab a plate this Thanksgiving.

"At first it was a slow trickle," Dench's daughter, Lisa Dench said. "But then they came rushing in. I scrolled and scrolled and said to my mom, 'You've got a lot of love. We've got to make this into something.'" Dench and her family said they think people were moved by the feel-good story amid the tension following the presidential election.

"We feel like it was fate that this occurred during such a rough time and right before Thanksgiving," Lisa Dench said. Hinton told the newspaper that Wanda Dench was "very open and welcoming."

"I'm thankful for all the nice people in the world," he said. "I never met her ... and she welcomed me into her house, so that shows me how great of a person she is." They even took selfies together and posted them on social media.