A swim to remember

He has 10 world, three Asian and seven national records to his credit. 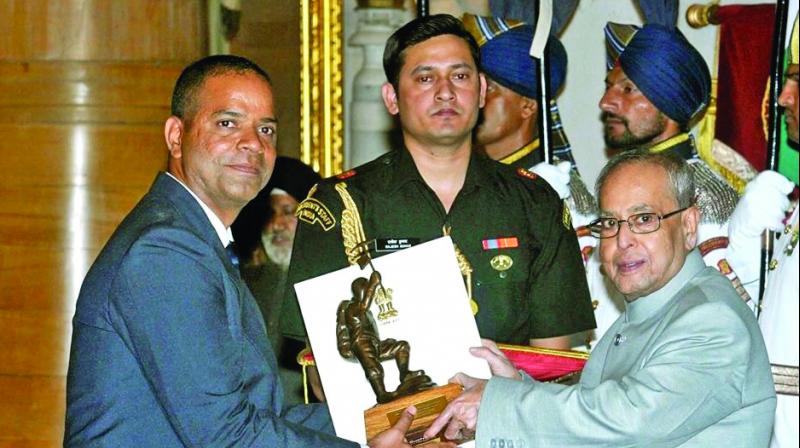 Like straight out from an adventure novel, Wing Commander Paramvir Singh with his troop of open water swimmers (who are called The Sea Hawks) will start a swim in the Arabian Sea from the Gateway of India, Mumbai, culminating at Mangalore. The challenge, which is being undertaken to pay a tribute to the victims and martyrs of 26/11 terror attacks is set to break the world record of the longest open water swim.

Speaking of the challenge, Singh says, “While no tribute can fill the void left in the lives of their loved ones, we wish to pay our immense gratitude to families who put on a brave face despite the loss and to the unsung heroes who perished in time.”

With no interlude to the journey spanning across 14 days and nights, Paramvir Singh and his team aim to cover a distance of 1,000 kilometres along the coastline of the subcontinent.

Singh is a brave heart who has undertaken several such expeditions, most recently an open water swim from Goa to Mumbai and a swim down the entire stretch of the river Ganga (from Devprayag in Uttarakhand to Ganga Sagar in West Bengal), being the first one to accomplish such an event.

“We’re a team of six — three from the Armed Forces, one from Mumbai Police and another 16 year-old boy,” he adds. The team will be plunging in the water today at 5.30 pm and tentatively complete the swim on December 10. Speaking about preparation, Paramvir adds, “Just before any expedition, we do a thorough background study. I have all the data — there are jellyfish, sharks and stingrays, and then there’s pollution, rocky channels, so we have to keep these things in mind. The training is a continuous process, but I often say it’s 80 per cent mental and only 20 per cent physical strength.”

More often than he would like, the Wing Commander encounters wildlife during these expeditions. “I remember on my Ganga expedition, I had come very close to a Gangetic gharial. There was a raft that kept clearing my way; they were the ones who first spotted the gharial. And they quickly came against the tide to pick me up in the raft. And from the next day, we decided to have a motor raft, the sound of which keeps the animals away, and I swam next to the raft. I also spotted a Gangetic shark at the end of that expedition near Bay of Bengal,” he recollects.

The 41-year-old officer is an open sea scuba diver, certified rafting guide, long
distance open-water swimmer as well as a Triathlon athlete, high altitude marathon runner, skier, mountaineer, skydiver and paragliding pilot. He has 10 world, three Asian and seven national records to his credit. The officer was conferred with the Tenzing Norgay National Adventure award for the year 2014 for his outstanding contribution in water sports, the highest award in adventure sports bestowed by the Government of India, equivalent to the Arjuna award. Currently, he is posted at the military academy near Ooty.