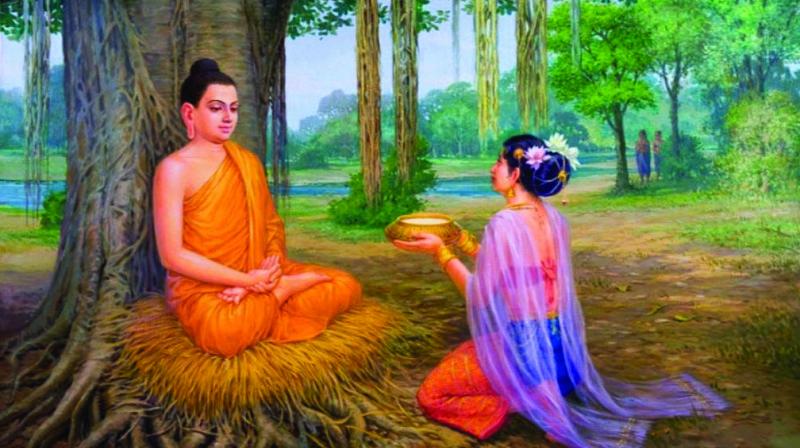 Buddha received bowl of Kheer from the cowherd girl, Sujata

The portrayal of female characters in Indian mythology has often come up for discussion, with many assuming that the seeds of patriarchy are sown in our scriptures. Disproving these assumptions, well-known writer Devdutt Pattanaik, who was in the city, speaks extensively about the various examples of empowered women that one can find in Hindu mythology.

Devdutt, who has written many books deciphering the various Vedas, Puranas and other mythological tales, narrates many stories of female characters from Hindu mythology to illustrate how women back in the days were strong and independent.

Taking on the assumptions attached to the term “Sati-Savitri”, Devdutt reveals that in the Holy Scriptures, Sati and Savitri are quite the contrary characters.

“Many of us don’t understand these stories completely and thus have a false assumption about these ladies. If you read up however, you will find that both Sati and Savitri were women who had their own minds and made their life choices independently without any pressure from their father or husband,” he explains.

Free-spirited women
Discussing the role of female characters in Indian mythology, Devdutt explains that there have been many women in the Vedas and Puranas who had more than one husband/ lover and that society didn’t have any bias towards them.

Citing the example of the apsara Urvashi, the author says, “There is a very interesting story about Urvashi and her husband king Pururavas in the Rig Veda — the famous Raja Ravi Varma painting depicts this. The apsara decides to leave the king after living with him for four years. He is heartbroken and begs her to come back, but she refuses on grounds that she is immortal and bored of the king, who is a mere mortal. Such stories reveal what women’s status was in the ancient society.” 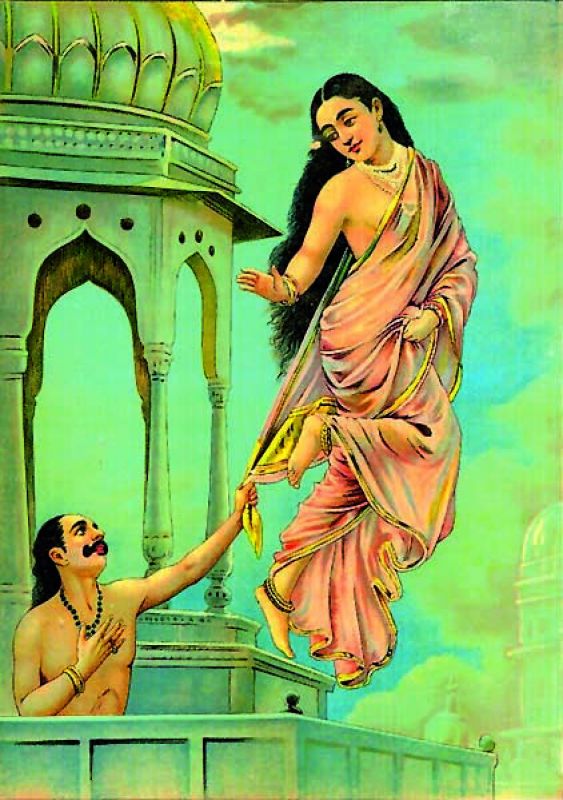 Devdutt also talks about how women expressed their desires freely without any hesitations back then. “Take the case of Sati or Parvati,” narrates the author, adding, “She was the daughter of Prajapati Daksh, who fell in love with Shiva. To get Shiva, she does tapasya and when Shiva comes to meet her, she expresses her desire of being with him freely.”

Empowering the Gods
Further, Devdutt explains how many women were an important part of the mythological stories and in fact, helped the Gods reach their goals and destinations.

“Take for example, the Jagganath Temple in Orissa. All the tales that you hear in the temple is about the Lord’s conversation with Subhadra, his sister and his quarrel with goddess Lakshmi,” says Devdutt. 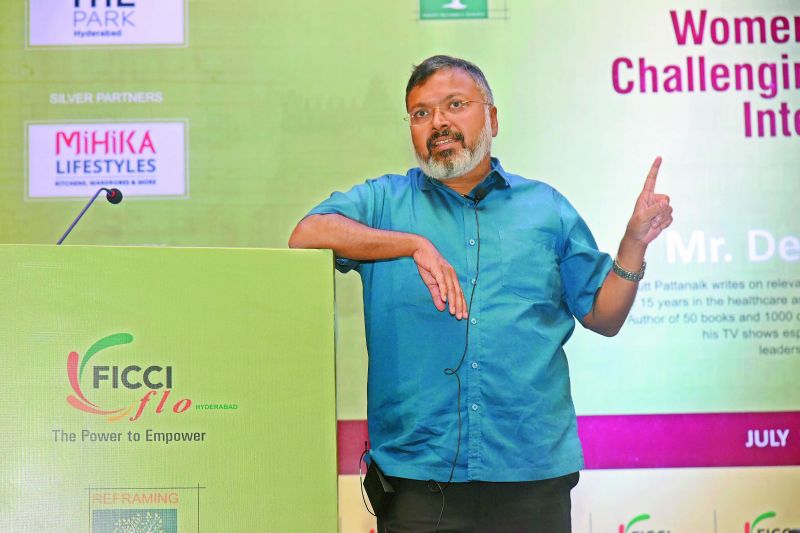 The author also states how Buddhism has contributed in making women invisible in the mythological tales. “The Buddha became an enlightened teacher after he left his wife Yashodhara and newborn child. However, if you read the tale about Buddha’s journey to enlightenment, you will find that if the cowherd girl Sujata didn’t offer the bowl of kheer to him, he would have never reached his goal. Also, the first person who Buddha tells about his enlightenment is the Earth, Bhu Devi,” explains Devdutt, who adds, “There are many such stories where women have been made invisible to celebrate a man. But if people read  these stories, they would find out about these female characters.”

Devadasis
While most people claim that women in our ancient culture were restricted and didn’t have many powers, Devdutt gives several examples to prove otherwise. “There were essentially three types of women in our society. First were the bhikkunis, or the ones who didn’t take any husband. The second were women who had one husband and stayed loyal to them throughout their lives. Third were the devadasis, who had many lovers and didn’t marry anyone,” he explains.

Elaborating on the devadasis, he adds, “Devadasis were very wealthy and powerful. They controlled many temples, where they would sing and dance. But over a period of time, they were assumed to be the lowest in the class strata of India. People even thought of them as prostitutes, and thus, these systems were shut down, taking away the vocation of hundreds of women.”