Raised in California, the bug of wizardry bit Vivek when he used to drive down to Las Vegas on weekends with his parents. 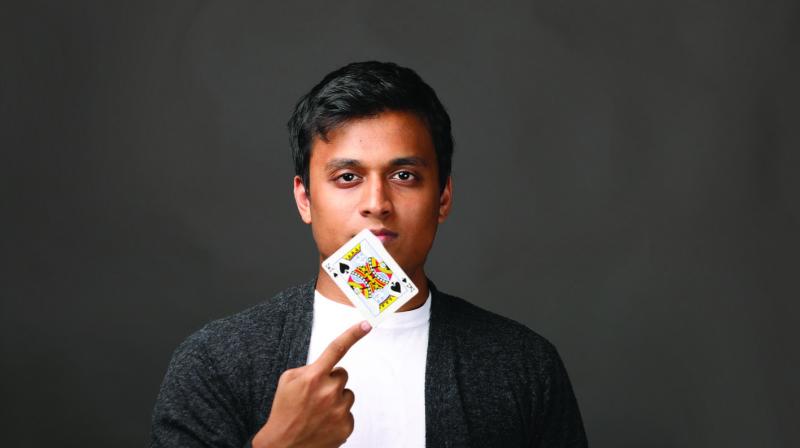 Raised in California, 22-year-old Vivek Desai is India's youngest magician who is self -taught and has enthralled many across the world through his mind-boggling performances.

For centuries, subjects such as magic and illusion have fascinated us. And magicians—through their art— have intuitively assured the world to believe in the world of illusion. And 22-year-old Vivek Desai, India's youngest magician, is no exception. Vivek's journey began as a hobby at the age of 11 and by the time he was 16, he was practising it professionally.  “Every time I hold a new object, my first thought is ‘Can I create a trick around this’ or ‘Can I adopt an existing trick to incorporate this object,” says the young magician.  Despite having to repeatedly perform the same tricks, the youngster never lets the monotony set in. And his greatest reward is the look of disbelief and amazement on his spectators’ faces. “The amazement on audiences’ faces after a trick, never gets old and the gratification I get from that as a performer has kept me going,” expresses the magician.

Raised in California, the bug of wizardry bit Vivek when he used to drive down to Las Vegas on weekends with his parents. The ever-happening city lights and sprawling casino scenes would cast a magical spell on him. The disappointment of not being able to enter a casino due to an age restriction did not stop or bother Vivek from exploring the world of magic and illusion, which later went on to mould an illusionist within him.

“With the years progressing in the US, my affair with magic grew fonder and through continuous practice and following my greatest inspiration American magician David Blaine, I tried to master the art to some extent,” reveals the self-taught magician who learns the art of illusion using books and other reference materials. When asked if he can levitate like David Blaine, he wisely responds that he can display the illusion of levitation but can’t really levitate, nor can any magician in the world. “Magicians are entertainers, any magician claiming to have real God-given superpowers or abilities is either lying or delusional. All magicians in the world agree to this,” he claims.

Once he settled in India in 2009, did Vivek face his own set of challenges in terms of societal acceptance and awareness about magic. However, such hurdles did not deter him from exploring a full-time possibility of converting his interest into a profession. “Most Indians love watching videos of street magic by International magicians so I think, we have a great audience here. It's just a matter of reaching out to them,” he believes.

“One thing I've always noticed is that once they have seen a few tricks, they start reacting with the same amazement as any other normal spectator would, which is one of the few instances where they genuinely seem to let their guard down,” he elucidates.

Apart from being a magician, Vivek is a card-cheating consultant for games like Poker and Blackjack for various private security firms. In his spare time, he spends time watching his favourite movies — The Prestige and The Incredible Burt Wonderstone, or prefers playing video games. Just like any millennial, he too is fond of fantasy adventure films such as The Lord of the Rings and Harry Potter. When it comes to travelling and exploring the world, the young magician wants to explore Tokyo, especially Shibuya and Akihabara. “I don't travel outside of work. I'm a big gamer and I usually am on either my Nintendo Switch or my Ps4 whenever I have time off,” he signs off.