Life   More Features  26 May 2018  Doomed white rhino could save species from beyond grave
Life, More Features

Doomed white rhino could save species from beyond grave

Scientists have made progress with rhino IVFs and in just few years have successfully harvested female eggs and fertilised them in labs. 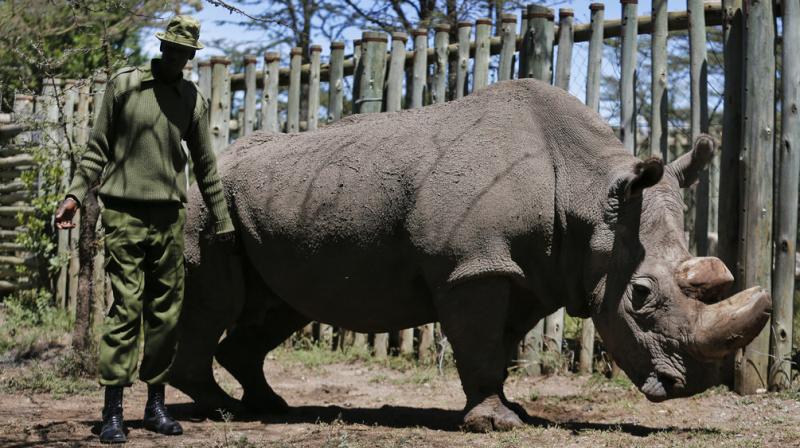 A ranger takes care of Sudan, who was the world's last male northern white rhino, at the Ol Pejeta Conservancy in Laikipia county in Kenya. A southern white rhino has become pregnant through artificial insemination at the San Diego Zoo Safari Park — giving hope for efforts to save a subspecies of one of the world's most recognizable animals. (Photo: AP)

According to reports the last male northern white rhino could save his subspecies going extinct from beyond the grave.

According to a report published in The Times, scientists have made significant progress with rhino IVFs and in just a few years have successfully harvested female eggs and fertilised them in laboratories.

Scientists are hoping to use a small stock of sperm to perform IVF on Sudan's two remaining relatives.

However, since both females (Sudan’s daughter and granddaughter respectively) are too old to become pregnant, scientists would use a female southern white rhino as a surrogate - in a staggering double first for rhino reproduction.

It was initially thought the resulting offspring would be inbred, but scientists are reported to believe there is enough diversity for the DNA to survive a so-called "genetic bottleneck".

The southern white rhino was saved from a similarly desperate position following a sharp drop in population blamed on poaching and destruction of their habitat.

There were only 20 left alive in the early 20th Century, but there are now more than 20,000 southern white rhinos in the wild.