In what is being hailed as a brilliant PR move, PM Narendra Modi handpicks actor Akshay Kumar for his first ever non-political interview. 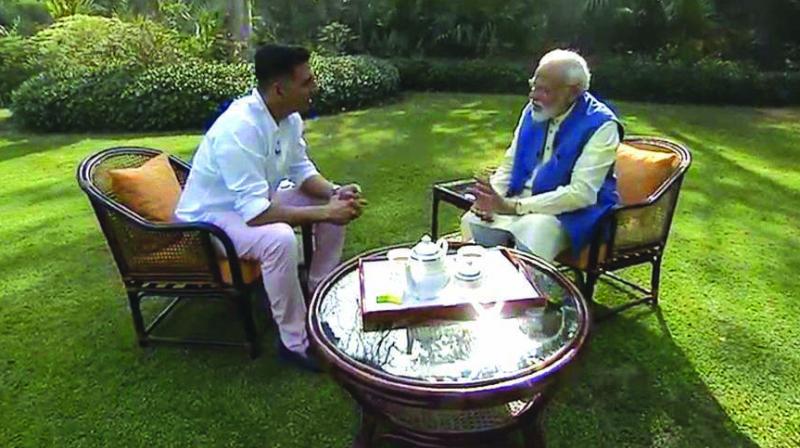 This human side of the Prime Minister has struck a chord in a way that perhaps no electioneering pitch could ever have.

The BJP and Prime Minister Narendra Modi in particular have scored a resounding hit by getting actor Akshay Kumar to do the PM’s first ever non-political interview.

The actor’s tweet — “While the whole country is talking elections and politics, here’s a breather. Privileged to have done this candid and COMPLETELY NON POLITICAL freewheeling conversation with our PM @narendramodi . Watch it at 9AM tomorrow via @ANI for some lesser known facts about him!” — did alert everyone about the interview which has since gone viral. Akshay quizzed the PM about everything except politics, including his eating and sleeping habits to his relationship with Mamata Didi who sends him kurtas and Bengali sweets regularly.

This human side of the Prime Minister has struck a chord in a way that perhaps no electioneering pitch could ever have.

Praising the interview, former BJP strongman Shatrughan Sinha says, “It was a masterstroke for the PM to choose the one and only patriotic superstar Akshay Kumar, who had done his homework well and asked questions that made our Prime Minister appear warm and human.

Further, I think it is a matter of great pride for our film industry to have one of us being chosen to interview the Prime Minister.” Meanwhile, sources in the Congress say they never expected this masterstroke from the PM. “That one interview will do the BJP more good this election than a thousand political rallies,” says the source.

The interaction between the Prime Minister and Akshay Kumar was an easy, casual conversation where the latter drew the PM to talk about the many interesting aspects of his life.

The PM tells Akshay that as a child he enjoyed eating mangoes and was very particular in plucking the ripe fruit from the tree, and not pluck them raw and ripen them later. Aam ras too was his favourite. But now, he has to watch his diet, so doesnt have that many.

‘Never thought I would be PM’

Modi confessed he never expected to be chosen as the prime minister... “such thoughts don’t even occur in the mind of a common man. My background is such that even if I’d got a decent job my mother would’ve celebrated by distributing sweets among the neighbours,” he said, adding, “I let destiny lead me.”

Modi even thought of becoming a sanyasi  at one time, went to the Ramakrishna Mission. He was also fascinated with the army. When a convoy of armymen would pass by, as a child, Modi said he would run there and salute them. “Bada maza ata tha unko dekhke,” he said. He even paid Rs 2 to get  the syllabus of a “sainik school”in Gujrat to see if he could join.

When Akshay Kumar asks Modi about wanting to have his family live with him in the PM house, Modi says matter-of-factly that he left home at a very young age, so there’s a sense of detachment.

“My mother too is not very comfortable being here now, she says she’s happy in the village with her friends. Here she’s alone while I am caught up in my duties.”

“I never get angry. As PM for so many years, not once from the chaprasi to the principal secretary have I got angry with. I am strict; a disciplinarian. Main kaam karvata hoon... main khud kaam karta hoon.. kabhie raat ke 12 baje tak bhi.”

But I don’t look down or humiliate my team. I work with them. Where there are flaws, I explain to the officers. Anger leads to negative feelings, spoils the agenda of the meetings.”

“Early on itself, I followed a method, to manage my anger. If I got very angry, I would write the entire episode on a paper and read it — how it happened... who was involved etc. If by the end of it I could not let go of the anger, I would re-write the whole thing again. Here I am not being judgemental. Don’t let ego come in the way. And if I realise I am wrong, I would accept it. This helped me deal with emotions. This is how I trained my self.”

“I don’t know how these expensive medicine work. I believe in Ayurveda. I only drink warm water and try fasting when I catch a cold. I put a drop or two of sarso ka tel in the nose. It burns, but it cures my flu quickly,” the PM said.

Friends in the Opposition

“Offcourse, I have friends in the Opposition party. Ghulam Nabi Azad is very friendly.
I should not be saying this in the election season! Mamata Di sends me kurtas once a year.