The two-day 'powwow' in New Mexico is one of the largest annual gatherings of indigenous people in the United States. 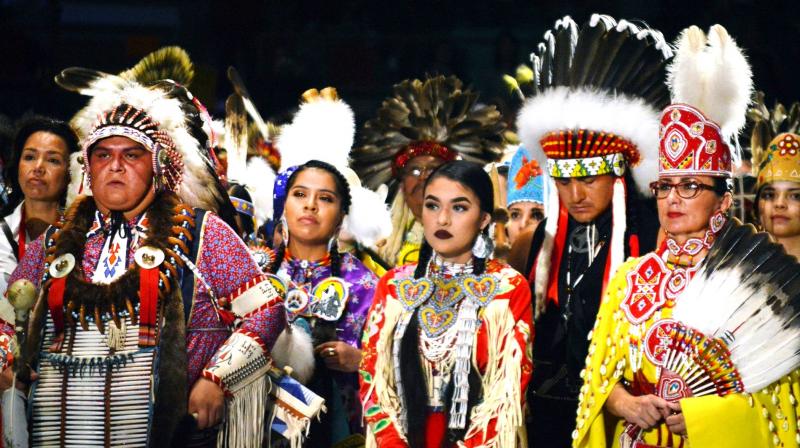 Native American dancers from the United States and Canada take part in the grand entry to the Gathering of Nations in Albuquerque, New Mexico. (Photo: AP)

Albuqerque: One of the largest annual gatherings of indigenous people in the United States began on Friday in New Mexico, where organisers of the two-day powwow say they want to build awareness around the deaths and disappearances of Native American women.

Melonie Mathews, whose family founded the Gathering of Nations Powwow, said organisers are dedicating the Miss Indian World Pageant to missing and murdered indigenous women. Their plight has become a focus in the past year of state and federal legislation, marches and demonstrations and a series of stories by The Associated Press.

A national awareness campaign will be promoted on a billboard near the powwow venue in Albuquerque. Several federal lawmakers, including one of the first Native American women elected to Congress, Deb Haaland of New Mexico, said in a statement Thursday that they are endorsing the campaign.

“We’re just recognising and trying to bring more of a call of action toward the issue itself,” Mathews said. “What we would like to do is plant the seeds with the pageant contestants. We want them to create a dialogue with their communities. Hopefully it will be the beginning to the end of this problem.”

On some reservations, federal studies have shown Native American women are killed at more than 10 times the national average. The pageant was expected to include 18 contestants from tribes in the United States and Canada, who will be judged on their public speaking and cultural presentations.

About 3,000 singers and dancers and 800 artisans are expected to participate in the powwow. It has grown over the past three decades from focusing solely on Native American singing and dancing to a festival-like event featuring a parade, contemporary music and artisans market.

The powwow has a “long-standing history of highlighting issues of importance to Native Americans in North America,” a spokeswoman said in a statement. It has previously promoted voter registration, youth issues and opioid abuse prevention between its marquee events, which include the twice-daily grand entry of dancers.

The procession of thousands of dancers features a kaleidoscope of colours as men, women and children wearing traditional clothing and dance regalia spiral into the powwow arena. Their push for further awareness of missing and murdered indigenous women had the potential to reach 10,000 people expected to attend the powwow.