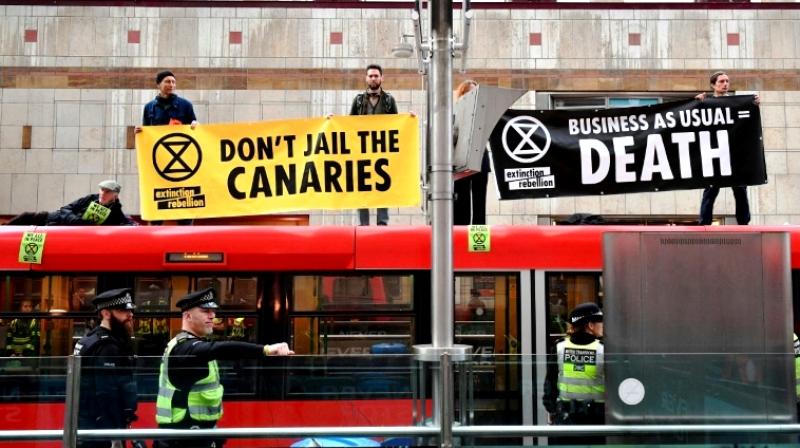 London: Environmentalists glued themselves to the London Stock Exchange entrance and staged impromptu concerts in the middle of traffic on the final day of a campaign that brought parts of the UK capital to a standstill.

Activists from Extinction Rebellion, a fast-growing movement founded last year by British academics, used 11 days of festive but highly disruptive rallies to focus global attention on climate change. Their ultimate goal is to slash greenhouse gas emissions to a net level of zero by 2025 and bring biodiversity loss to a halt.

But their immediate aim was to get UK politicians to look past hot-button issues such as Brexit and think of ways to save the planet from irreparable damage that younger generations think will hurt them the most. Extinction Rebellion members said their campaign received a great deal of public attention but failed to get the government to budge.

The traffic disruptions have really, really brought the whole climate and environment out from being a niche issue," guitarist Nick Onley said while leading a group of 20 through a Beatles song performance in the middle of a busy London intersection.

"But it hasn't been a complete success. We haven't got to that point where the government says yes, please talk to us," Onley said as drivers stuck in the heart of London's bustling financial district furiously honked their horns. The protest outside the London Stock Exchange building that stood in the shadow of St Paul's Cathedral saw several protesters  glue themselves to the pavement in front of one of the glass entrance turnstiles.

One person wearing a gas mask also chained himself to one of the sleek building's stone columns. "Many of the most environmentally destructive companies in the world have their stock market listings at the London Stock Exchange (LSE)," the group said in a statement. This institution literally trades in the devastation of our planet."

AFP reporters counted seven campaigners at the building's entrance. Police eventually separated them and trading opened as usual. They also camped out on a statue-filled square facing the grand parliament building and potted plants and flowers on a central bridge.

But some activists admitted that Londoners often seemed befuddled about why the group thinks such tactics will help stop climate change. "Some people don't like our methods but do like our message," retiree Trudy Warner said. “What we say is: We're not here to be liked. We're here to get attention," he addes.

Their tactics of sitting down in the middle of busy roads and refusing peacefully to move have proved remarkably effective at generating media headlines. The entire campaign saw police make 1,130 arrests and press charges against 69 people.

Retired engineer Godfrey Whitehouse said he spent three nights in a police station holding cell. “I am just an ordinary member of the public who is absolutely terrified of the climate," Whitehouse said. "And we would like to apologise to the public for the disruptions," he added softly.