Padma Shri Odia poet Haldhar Nag is in Mumbai for the Gateway litfest where he was presented the Lifetime Achievement award on Saturday. 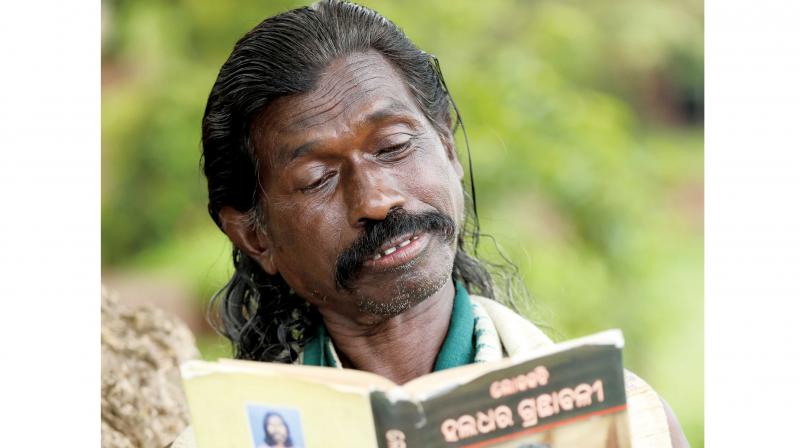 Dressed in a white dhoti, and a Sambalpuri shawl, Haldhar Nag, the people’s poet, came down barefoot at the lobby of an upscale hotel in Mumbai. A third standard dropout whose poems became subject matter for several PhD theses and who was honoured with Padma Shri last year, was honoured the first Gateway LitFest Lifetime Achievement Award.

Best known as the Lok Kabi Ratna, Haldhar is a Sambalpuri poet from western Odisha and writes in the Kosali dialect. Born in 1950 into a poor family at Ghess, in Bargarh district, about 76 kilometres from Sambhalpur, he lost his father when he was 10, forcing him to stop his formal education.  He took up a job as a dishwasher at a sweet shop. But two years later, he shifted to a school, where he worked as a cook. He remained there for 16 years. Then he took a `1000 loan to set up a small shop.

After years of forming a reputation within his community as a folk singer, he finally started writing down his poems. “I still compose my poems in my head first. I keep repeating them till the lines sound right to the ears and only when I’m convinced, do I write them down,” says Haldhar.

Although he lacks the savoir faire of being a literati, Haldhar is conscious yet unaffected by all the attention. “My job as a poet is to keep on writing and I will do that. The rest is all paraphernalia. It’s okay, nothing great,” he adds.

But his lackadaisical approach to attention vanishes as soon as he starts talking about his poetry. He spoke of a certain poem that he had written about Urmila, Laxman’s wife from Ramayana. “Often characters on the fringe are forgotten and the poet limited by the form cannot do justice to these characters. I try to fill those gaps,” he says speaking about his love for the epics.

He also has a talent to remember and recite verbatim, all his poems and even the epics in Sanskrit, a language he picked up during his early childhood. Needless to say, he is considered a master of Kosali dialect. His style and techniques created a new genre ‘HaldharDhara’ in Western Odisha.

“Our tongue is different from the rest of Odisha, but these days these minute differences are getting lost in our race to become one. But as a poet, it is our duty to write in our own tongue not only to preserve it but also because it is only in one’s mother tongue that one can speak the truth,” he remarks.

However, about twenty years ago, he didn’t know what poetry was. When someone suggested that he write poetry, he picked up an anthology and read a poem by a Sachidananda Routray. Soon after following the Jnanpith Award winner’s form, he penned his own first poem Dhodo Bargachh (The Old Banyan Tree).

Ever since, through his works he talks about fighting oppression, nature, religion, and mythology.

“When the society or a king goes in the wrong direction, it is the job of a poet to show the right direction,” he says, further adding, “after all poets are Brahma, the creators of God. Without Valmiki, without Vyasdeva, you wouldn’t have had the gods that you worship,” he concludes with a smile.