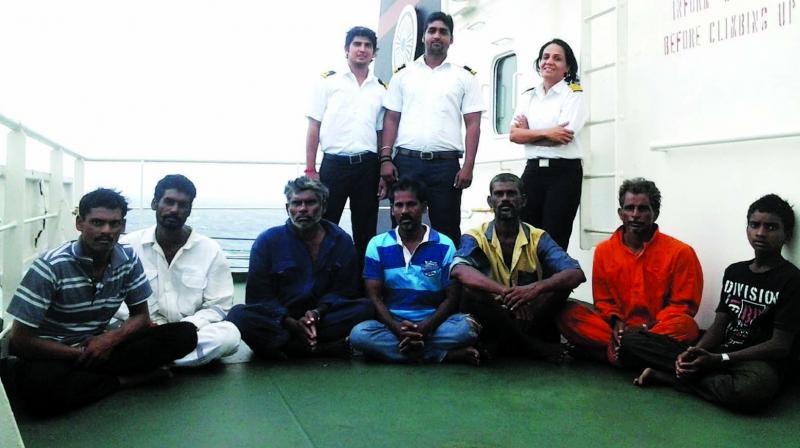 She has many firsts to her credit — Capt Radhika Menon is the first woman captain of India and the first woman in the world to receive the International Maritime Organisation (IMO) Award for Exceptional Bravery at Sea. Radhika, a native of Kodungallur, Thrissur district, had never foreseen all these while beginning her journey in 1991. This Republic Day, she shares with us the tale of her sailing career so far and the rescue operation that won her acclaim.

“From the beginning, I wasn’t interested in a 9 to 5 job. I wanted to do something different,” she says. “When I saw the radio officer course advertisement, I found it satisfying. I got into it, completed it and that eventually led me to join a ship with  the Shipping Corporation of India,” she adds.

Having begun her career as a radio officer, who handles the communication part, Radhika’s interest gradually shifted to navigation. Slowly she worked towards her goal. She appeared for a series of examinations, cleared them all, acquired a master’s certificate and ascended up in ranks. She took command of the ship — MT Suvarna Swarajya — in 2012. “That is when I got to know that I am the first female captain of the country,” she smiles. “I did what I wanted to do and the end result happened to be this,” adds Radhika, who believes that no profession is gender specific.

And she bravely treaded the male-dominated territory. “My family was supportive and I was determined to go,” she says. It wasn’t welcoming at the beginning, but Radhika was clear about her goal and ready to work towards achieving it. “When you have a problem, you should analyse it properly and try to find a way out. I kept going.”

The rescue operation that won her the gallantry award took place while she was the commandant of MT Sampurna Swarajya, her third ship. “We were coming to Visakhapatnam from Budge Budge. The sea was very turbulent,” she recalls. High waves of 7-9 meters, winds of 60 to 70 knots along with heavy downfall and lightning made the situation worse. “We were having a rough time because of the deep depression formed near Kakinada (Andhra Pradesh). It was coming in the opposite direction.”

Meanwhile, she entrusted the second officer to watch the sea to go to the cabin and freshen up. “As I went down, he called me back and said he found something. When we looked through the binoculars, we realised it was a boat with no accommodation,” She says.

The boat adrift on the sea had seven persons including a small boy and they were struggling to survive. Radhika called emergency stations and briefed her teams. The ship’s officers and crew got ready immediately  and they went out on the open  deck to put pilot ladder.  “I went around the boat trying to create a shelter. We put the pilot ladder on the starboard side so that they can climb up.”

They had passed a rope to the boat to hold the boat close to the ship. They couldn’t get the men in the first attempt. In the second round, they got two persons, but then the rope broke. It was the third attempt that got all of them on board. “There were wounds on their bodies. They were hungry. They survived licking the ice kept in the boat to preserve the catch,” Radhika recollects.

“On June 16, 2015, they were fishing in sheltered waters in Kakinada area and weren’t aware of the weather conditions. Their boat’s engine failed first; then they lost the anchor and food was washed away. They had been carried away by the depression in its direction,” she says.

Radhika asked the leader of the seven-member team to contact their families from the ship’s satellite phone. “There is a belief among fishermen that if those who have gone to the sea didn’t return after seven days, they are considered dead. Tents had been erected at the houses of these fishermen for performing final rites. The families couldn’t believe that they were saved and were so happy.” 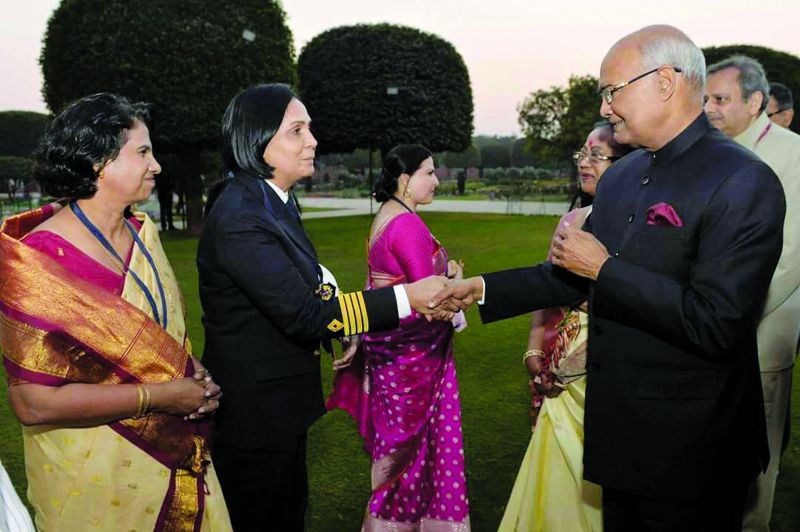 With President during First Woman Achiever Awards at Rashtrapati Bhavan

Later, she came to know that the Govt of India had nominated her for the award. “She has also won Lloyd’s list the Seafarer of the Year 2017 Award and has been honoured at the First Woman Achiever Awards.

On November 3, 2017, Radhika, along with her two colleagues — Suneeti Bala and Sharwani Mishra — launched the International Women Seafarers Foundation with the intention to solve problems of women seafarers. “It is a motivational process, a platform where they can talk about their problems and we can share our thoughts,” says Radhika.