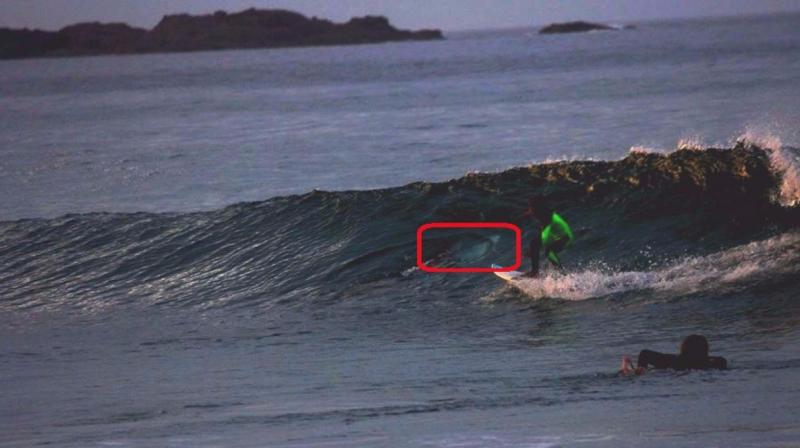 From the angle, it looks like the shark was spooked and is rolling away from the board to escape it (Photo: Facebook)

Sydney: A 10-year-old surfer has had a close encounter with a photo-bombing shark that shared a wave with him off an Australian beach.

Chris Hasson said Thursday that he was taking photos of his son Eden riding a wave off Samurai Beach at Port Stephens, 180 kilometers (110 miles) north of Sydney, on Tuesday when something unexpected and indistinct caught his eye.

He discovered he had photographed the face of a twisting shark just below the surface with his son on an apparent collision course.

"I saw the second photo and (thought) - no way," Hasson told the AP. "I quickly called him in and whistled."

"He (Eden) saw a shape in the wave and thought it was seaweed and felt something as he went over the top - he got his leg rope caught on something - but he thought nothing of it until he saw the photo," Hasson said.

James Cook University shark researcher Andrew Chin said the photographed shark was possibly a small great white. "From the angle, it looks like the shark was spooked and is rolling away from the board to escape it," Chin said. "There is no way that this is a hunting approach."

Eden said he was glad he hadn't seen the shark until he was safe on the beach and saw the photo. "If I was on the wave and saw it, I probably would've freaked out and fell off," Eden told Nine Network television on Thursday. "I was lucky I didn't fall off."

Port Stephens is on the northern coast of New South Wales state which has experienced an extraordinary increase in shark attacks since a Japanese tourist was killed by a great white in early 2015.

Hasson said he was back in the surf with Eden and his siblings, aged 12 and 5, on Wednesday to enjoy the final week of the school summer vacation.

"Everyone's back to business. It's too good a lifestyle sport not to," Hasson said.