Men behind the warrior statue

Sculptor Ram V. Sutar and his son, Anil, will design the the controversial Chhatrapati Shivaji sculpture in the Arabian Sea. 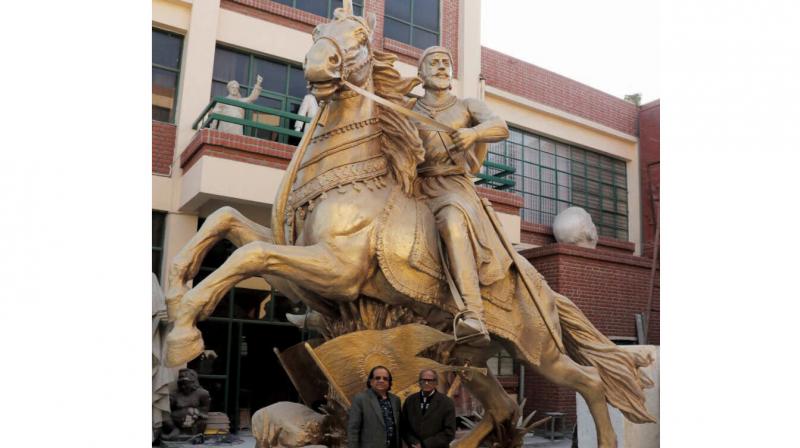 Ram V. Sutar and Anil Sutar in front of the 25 ft tall prototype that they have built in their studio in Noida.

The 395-ft-tall statue of Chhatrapati Shivaji in the Arabian Sea that Prime Minister Narendra Modi laid the foundation for on Saturday, has already drawn comparisons with some of the most prominent statues worldwide — most commonly the Statue of Liberty in the USA.

Father-son duo Ram V. Sutar and Anil Sutar will build the sculpture, while architect Jay Kartikar will design the pedestal which will also house a museum and cafes among other things.

Speaking about the sculpture, Anil says, “We had made about seven to eight models out of which this was finally selected.” The design of the statue, he says, is very different from the usual ones. “The final model has the horse standing on its hind legs, as if it is running. Moreover, Shivaji’s face will have a victorious smile and he will be brandishing his sword,” he says. Anil has studied architecture and urban design in Delhi and the US. He went on to live there but returned to India in 1994, to work with his father. The two have been collaborating for more than 20 years now.

Hailing from Dhule in Maharashtra, Ram studied at J.J. School of Arts from 1950 to 1954. Today, at 92, the Padmashree awardee still stands tall and works “eight hours a day”, says Anil. Among other feats, the duo has also worked on the 522 ft statue of Sardar Vallabhbhai Patel in Gujarat. Currently, they have made a 25 ft prototype of the statue, which is at their studio in Noida.

The outside of the statue will be made of bronze and the inside framework will be made of steel and concrete,” he says. To finish the work by 2019, they have to employ about 2,000 workers. “We have to work 24 hours, every day,” he remarks.

“Monuments,” the 59-year-old son points out, “are very important to build the collective conscious of a country. If you look at other countries like China and Russia, you’ll find that they have several such structures. It is usually a place where people can gather at. In a way, monuments are built to keep a particular incident in history or an important person in the memory of a country’s people,” he says.

When asked if he thought that building the statue would affect the environment, he says, “My job is that of an artist — we have been told to build the statue — and we’ll build it,” he concludes.