Riders to the sea 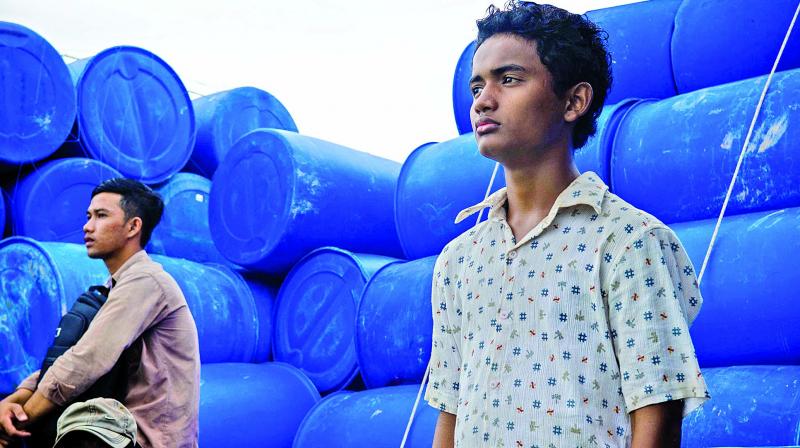 Still from the film Buoyancy

Rodd Rathjen’s Buoyancy, which won the Silver Gateway award in the International Competition category at MAMI, is inspired by true accounts of workers sold into slavery on Thai trawler boats.

Amidst the vivid greenery and slate skies of the Cambodian countryside is a trawler in the middle of the sea that crosses into Thailand. On the boat is 14 year-old Chakra, (Sarm Heng), the protagonist of Buoyancy, who elicits a sense of fear and uncertainty. While the young boy’s goal is to change his mundane existence in Cambodia, instead he ends up being enslaved on a trawler by a ruthless human trafficker. A harrowing thriller about modern slavery, Buoyancy by Australian writer-director Rodd Rathjen is inspired by true accounts of the workers sold into slavery on Thai vessels.

“After reading about this humanitarian issue going on in the fishing industry in South Asian countries, I felt great empathy for the survivors’ stories. I thought of bringing their voices to the world via this film and create awareness about human trafficking because the issue has been going on for decades,” says Rathjen, who was overwhelmed and surprised by the audience’s response to the film at the 21st edition of MAMI Film Festival. “I have never seen audience clapping during a scene. The audiences’ sensibility is different in India. It’s amazing to see people reacting to films this way,” gushes the director.

Shot in Cambodia in Khmer and Thai languages, Buoyancy is Rathjen’s debut feature film after several short films like Tau Seru, Small Yellow Field, Sweat, and The Stranger, among others. Talking about the process of shooting the film while at sea, Rathjen reveals that cheating the waves in the sea was a challenge. “The process of filming on a boat was difficult. We had to shoot in a way that the sea was visible all the time, but we couldn’t shoot when in between the sea. We had to take the boat out and take shots,” he explains, adding that the entire crew was supportive despite not having a network connection for several days.

While making the film, the filmmaker has been cognizant of his position as a Westerner showing another region’s social issues and handles the subject matter carefully: The cruel acts of violence and emotional duress are hardly sensationalised and have been strung together creatively. The tension in the thriller film builds gradually, leading to a brutal climax. “As a Westerner, I had to be very careful about how I make this film, particularly from the Thai side. I was scared because my goal was to not to make a film that the audience would see and feel dithered because it was poorly crafted. It was really a challenging subject because it is sensitive and it can possibly offend many,” expresses the director. Apart from the presentation and handling the subject matter, the director also feels sad about the reality of the issue. “The hardest thing was listening to the survivors during the process. I was sad and devastated which was the most emotional and challenging part,” Rathjen recalls.

When asked if films on such critical subjects should be made more often, he nods. “We have 40 million slaves around the world, and it is a big number. I think as Westerners, we can be far more conscious consumers of such subjects. Any film, documentary on any similar subject around the world will expose the audience to these issues,” the filmmaker explains.

Thrilled with Sarm Heng’s performance, the director reveals that he was actually looking for someone older and more experienced until he met Sarm at an NGO in Cambodia. “He was a street kid but was adopted by an NGO when he was two. He just inhabited the story and character in front of the camera,” Rathjen shares. Speaking about his learnings from the process, the director laughs saying, “I can write a thesis on that. I was sad when the film finished because everyone became like family to me.”

Buoyancy is also Australia's entry for the 2020 Oscar as well, but Rathjen is keeping his expectations low. “I am not expecting much because there are many good films made around the world. It’s lovely exposure to have the film there,” he says in conclusion.