The letter containing the claim was addressed to one of Prince Charles’s closest mentors. 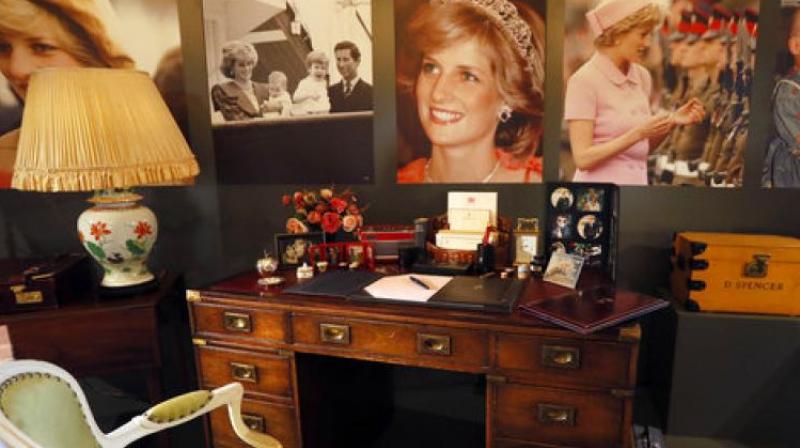 Display to mark the 20th anniversary of the death of Britain's Diana, Princess of Wales, a recreation of the desk where Princess Diana worked in her Sitting room at Kensington Palace, on display at Buckingham Palace in London, Thursday, July 20, 2017. (Photo: AP)

Many tributes have been made this year to mark Princess Diana's 20th death anniversary.

Her sons Prince William and Prince Harry for the first time opened up about their last conversations with her and personal memories they treasure.

From her charity work to the way she used clothes as a powerful communication tool, Diana's life was once again in the spotlight to be scrutinised and became cause for speculation.

The latest news about Diana making headlines is revelations from a letter recently uncovered that doctors and a few members of the Royal Family believed the princess might have had a "congenital condition" and they worried it could be passed on to future generations, according to a report by the Daily Mail.

The contents of the letter portray the doctors as more worried about the royal house's future well-being than a young woman in need of help. Royal physicians worried Diana was suffering from a mental disorder which for the House of Windsor was “dangerous” spelled “dynastic disaster”.

The letter was written, in February 1983 by psychotherapist Dr Alan McGlashan to Sir Laurens Van der Post, one of Prince Charles’s closest mentors. It was Charles that had asked Dr McGlashan to see his wife, according to the letter. Diana by then had steered away from royal medical specialists, their views and treatments prescribed for her.

The letter was found while researching about Van der Post. McGlashan used code when he referred to the royal couple.  Charles he called "the Young Man" and Diana he referred to as "D".

At the time of the letter, Diana was just 21 suffering from bulimia, anxiety, low self-esteem and post-natal depression. Diana was prescribed sleeping drugs and anti-depressants and attempted behavioural therapy, according to the letter. She was "surrounded by an army of doctors" who feared her symptoms and "overawed by the possibilities of dynastic disaster", Dr McGlashan wrote, the report reveals.

Sir John Batten, head of the Queen’s medical household at the time, Dr Michael Pare, from the Royal College of Psychiatrists, Dr Michael Linnett, apothecary to the Waleses’ household and behavioural expert. Dr David Mitchell was part of the Princess’s medical team.

"She is a very unhappy girl facing situations on various fronts which she finds difficult to deal with, though making a courageous effort to do so," McGlashan stated. He went on to say, the doctors "had been treating her as a patient with an obscure and dangerous illness which baffled them . . . She complained to me that they all treated her 'as if I were made of porcelain'".

It would seem that nobody came close to understanding what she was truly suffering.

In a BBC Panorama interview, years later Diana talked about her eating disorder and the difficulties she had faced. "It was a symptom of what was going on in my marriage," she said. "I was crying out for help, but giving the wrong signals and people were using my bulimia as a coat on a hanger. They decided that was the problem: Diana was unstable."