The depth, style and perfection of the recital came alive as the evening Baithak commenced. 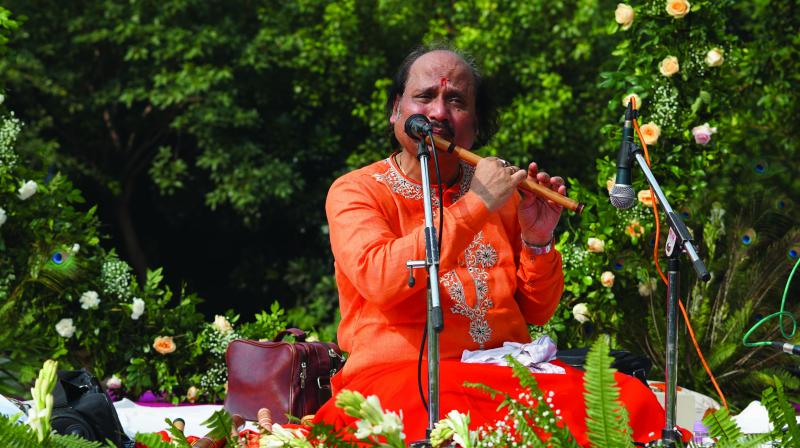 Accompanying Pt Majumdar on this musical journey were Pt Ramdas Palsule, the tabla legend, Omkar Dalvi, the Pakhawaj legend and the talented Rohit Kulkarni from Pune on the synthesizer.

The auspicious occasion of Janmashtami found a whole new meaning in the capital city of Delhi when flute maestro Pt Ronu Majumdar paid a tribute to everyone’s favourite flautist, Krishna ji on his birthday. Delhi witnessed the soulful flute recital on Saturday evening at Bharatiya Vidya Bhavan, which was organized by Legends of India (LOI) as a part of their initiative to promote Indian art forms. The depth, style and perfection of the recital came alive as the evening Baithak commenced.

Accompanying Pt Majumdar on this musical journey were Pt Ramdas Palsule, the tabla legend, Omkar Dalvi, the Pakhawaj legend and the talented Rohit Kulkarni from Pune on the synthesizer. The Baithak was an interactive session of classical music. The morning performance at Gurugram commenced with Raag Mangal Bhairav (Mangalkaari Raga), significant for the well being of society followed by a ‘Bhatiyali Folk Dhun’. The fervor of the maestro’s Gurugram performance (Morning Ragas) culminated into a scintillating performance in the city, beginning with Raga Gorakh Kalyan followed by Raga Ramdasi Malhar, a very rare piece to be played on the Flute. The touch of Banaras style, Jhoola and Kajri on the flute swayed the audience into a melodic trance. The enthralled audience also got to witness some musical magic when the rendition of a very exciting rhythmic jugalbandi between Pt Ramdas Palsule and Omkar Dalvi took place. Rohit Kulkarni, in an interactive session with the audience, explained to them the unique craft of playing a synthesizer to create or play Indian ragas.

Speaking about the initiative Dipayan Mazumdar, founder chairman of Legends of India said, “The format of our concerts has always aimed to encourage more engagement towards the sustenance of the traditional art forms. If these forgotten forms of traditional performance are not made a part of our everyday, beginning with its incorporation into the education syllabus, they will soon become mere showpieces.”

Keeping the current political scenario of the country in mind, Pandit Majumdar, towards the end of his concert, dedicated a very special piece for the people of Kashmir. As he played an original composition called “In love with Kashmir”, he hoped to reach out to the distressed souls. Finally, the performance found itself on a journey into inward tranquility with the harmonious renditions of classical music by the renowned musicians.

Dipayan Mazumdar believes that the most unique aspect of the event is the fact that even though evening ragas can be heard often as most concerts are held in the evening, it is the practice of morning ragas that is rare for music lovers to get to witness nowadays. “We religiously try to bring in distinguished musicians and newer, upcoming musicians to come and play together and interact with a smaller audience. It makes the entire concert very intimate as the musicians get to feel the pulse of the audience and play accordingly,” he adds.