Through the app Beyond Pink, an information platform for women, Dr Bindu S. Nair aims to bridge the knowledge divide between genders. 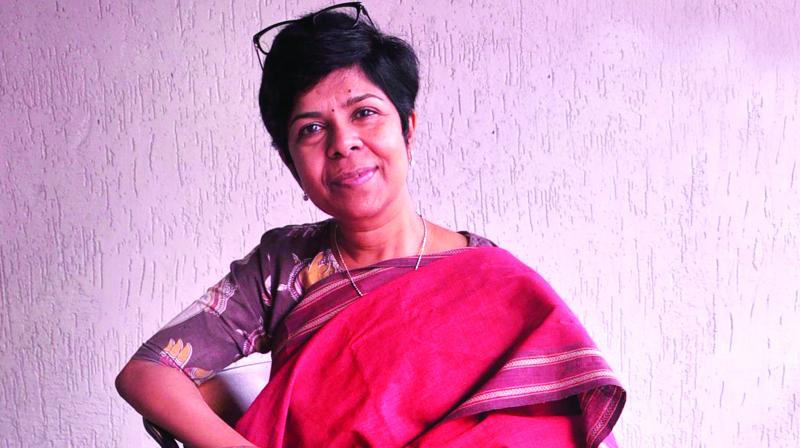 Information is the base of growth. It is important for women to read political and business news stories, too. (Photo: Vinod karimatt)

Popular talk show host Oprah Winfrey once said, “You must feed your mind with reading material, thoughts and ideas that open you to new possibilities”. Kochi-based Dr Bindu S. Nair, who has been working towards women empowerment for over a decade, also believes in the power of letters. Although women have come a long way in reducing gender disparity fighting many odds, she feels, the economic and the information gap is still wide, especially the latter one. This realisation encouraged her to start ‘Beyond Pink’, an app that provides both general and women-centric news snippets for women, in 2017. “Information is the base of growth. Of course, women get news from different sources, primarily social media. But, such feeds mostly revolve around the receiver’s interests. Generic news is not consumed much. It is important for women to read political and business news stories.  That is what we try to achieve through Beyond Pink,” says Bindu, founder of Beyond Media Labs Pvt Ltd. A Ph.D. holder in gender diversity studies, she quit her management job in 2008 to pursue this calling.

She quotes the study of the World Economic Forum to substantiate her thought. “Every year, the forum conducts a study to analyse the gender gap based on four parameters — education, health, economic participation and political awareness. The first two gaps have been bridged to some extent over the years. The gap seen in the other two still remains wide. We have to say that women’s political awareness is very low as they don’t consume such news. To be precise, there is a gap in reading structured information,” she says.

Bindu finds mainstream media’s male-centric point of views as one reason for this. “In many organisations, decision makers are men. About 80-85 per cent of news headlines are about men. Women-related news mostly will be about them being ‘victims’,” she observes.

She feels the news should be presented in a way to pique the interests of women. “Women have less time. When we give information as snippets, they can easily read it and become aware of everyday happenings,” says Bindu, claiming that the app has got 90,000 users within a short span. It targets women belonging to the decision-making age, which according to her, is between 12 and 40 years.

She has a team of writers and editors who gather and edit news from various platforms. “If the person wants to read it in full, she may go to the respective site.” Right now, the app is available in both English and Malayalam. She has plans to expand the platform to other regional languages as well. “Our intention is to inform women, inspire them, and thus empower them, because our nation needs resources. Women can bring creativity and financial security to a workforce,” she feels.

Bindu also stresses on the need for men-women collaboration. “There is a lot men can do for women. One is providing an environment for their growth. If I am here doing this, it is because my father believed in my talent and let me fly,” says Bindu, who tries to be gender neutral even in the name of her app. “The male-female segregation begins at the birth by wrapping a girl child in pink towel and boy in blue. She is taught to play certain roles society insists. When she grows, people look for her beauty, not knowledge. That should change. And, change comes with information. Hence, Beyond Pink,” she concludes.