But the entrepreneur has bigger plans for this e-Victorias and hopes to see them ply across a wider canvas. 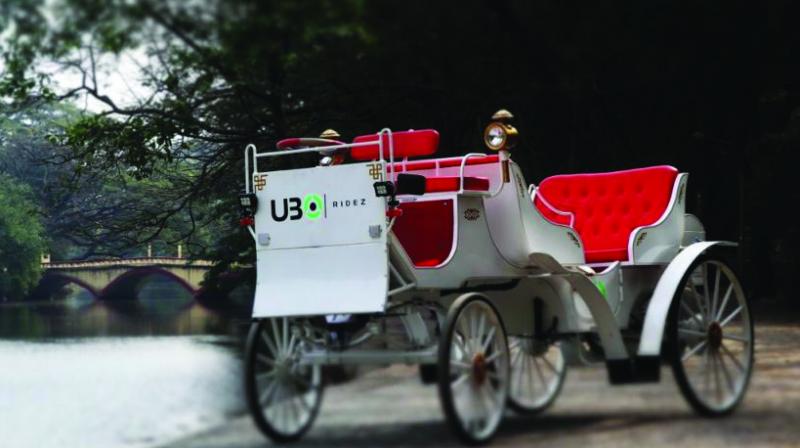 Launched by Ubo Ridez, these e-Victorias will run on lithium ion batteries, which are completely eco-friendly.

The centuries-old horse-drawn Victoria, colloquially known as ‘tanga’, was so central to the history of South Mumbai that it even bagged a crucial role for itself in the 1972 movie, Victoria No. 203, starring Ashok Kumar and Saira Banu. In the movie, the Victoria is priceless because it is the carrier of something valuable – a pulpy ploy that is strangely analogous to the Victoria being a receptacle of heritage.

However, over time, Victorias lost their sheen and their standing. In 2015, after repeated complaints by animal activists, the government put a ban on these vehicles on the grounds of animal cruelty. But now, the city is all set to get these Victorias back, albeit in an updated format, a ‘vikasit roop’ of sorts as about 10 e-Victorias will hit the streets of South Mumbai in the first week of September.

Launched by Ubo Ridez, a transportation company, these e-Victorias will run on lithium ion batteries, which are completely eco-friendly, and will boast an attractive colour scheme of black, red and gold. But these aren’t the only changes, and Ketan Kadam, CEO of Ubo Ridez, and a true-blue townie, tells us about all the other avant-garde additions made to the carriages.

“We’ve added GPS-triggered audio. People can choose a language of their choice from among the six options available and when the carriage passes in front of landmark buildings or locations, you’ll get information about these heritage locales. There’s also an audio system through which you can play your own music via Bluetooth,” reveals Ketan. As of now, the carriages will operate at tourist hot spots like Nariman Point, Gateway of India and Chowpatty, with tickets priced at Rs. 300 for the whole carriage for a short ride, and Rs. 500 for a long ride.

“We want to have an official launch on September 1st and I’ll be requesting the Chief Minister to flag off the event by handing over keys to the initial set of e-Victoria riders,” informs Ketan. This will be a moment of great satisfaction for Ketan, as when he started off working on the project a year and a half ago, the futures of the displaced Victoria riders were on his mind as well.

“I’ve travelled quite a lot abroad and have seen e-carriage formats taking centre stage all over the world. So, when the ban took place, it came to my mind that the e-carriages could be initiated in India as well. It would be a great boost to tourism; it's completely eco-friendly and more importantly, it could grant employment opportunities to the 420 riders who were rendered jobless post the ban,” says the entrepreneur.

Though the e-carriages are devoid of gears and only have acceleration and braking features, the riders will undergo a training process to familiarise them with the working of the vehicle. “The Transport department, which has been supportive and appreciative of the project, will also help train the riders,” says Ketan.

The tickets are currently priced at Rs. 300 for the whole carriage for a short ride, and Rs. 500 for a long ride, but Ketan says that one can also opt for the hop-on, hop-off feature, which lets you take multiple journeys from various points along the route over a span of six hours.

But the entrepreneur has bigger plans for this e-Victorias and hopes to see them ply across a wider canvas. “We’re trying to get the carriages to cover other iconic areas like Fountain, Fashion Street, Wilson and St. Xavier’s College, Ballard Estate, etc. We’re also going to introduce the hop-on, hop-off feature, in which a single ticket with a six-hour validity will allow you to take multiple rides along e-carriage routes. This will be included in the heritage tour of South Mumbai which is in the planning stage,” reveals Ketan.

He also wants to take these carriages outside the confines of South Mumbai and into areas like Carter Road, Five Gardens and Byculla Zoo. In fact, Ketan reveals that he has already received a request to have 20 carriages ply in Sanjay Gandhi National Park. “These e-carriages are excellent for tourism and are really novel as well. Children love them and they are extremely affordable, especially for the common man. It’s like the common man’s convertible; even if you can’t afford to own one, here’s your chance to enjoy a ride in one,” Ketan signs off.