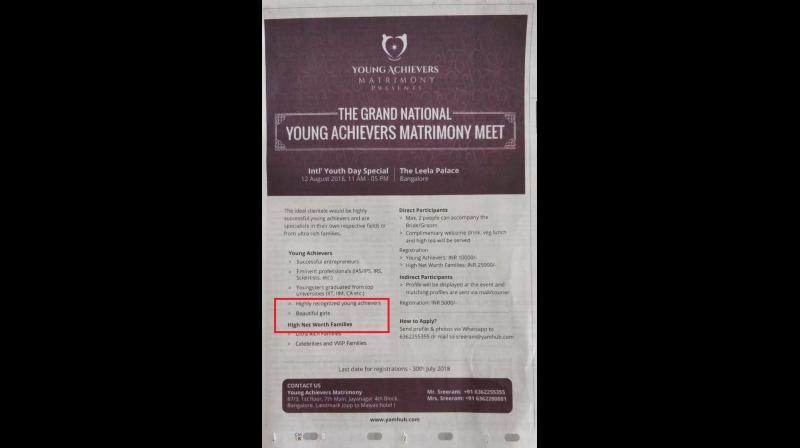 On Wednesday, The Hindu newspaper’s Bengaluru edition carried an advertisement covering a quarter of its front page. (Twitter Screengrab)

On Wednesday, The Hindu newspaper’s Bengaluru edition carried an advertisement covering a quarter of its front page. The advertisers, Young Achievers Matrimony (YAM), were calling for registrations for a matrimony meet on August 12.

While it may seem, oddly normal, the advertisement managed to be elitist, sexist and classist all at the same time.

In short, if one wants to shop for a luxury husband or wife, there is only one place to be, the event being held in Bangalore in the month of August.

The advertisement, given by Mr and Mrs Sreeram, who describe themselves as being the "best in the business" of elite matchmaking, is wrong on so many levels that, needless to say, Social media had a field day ripping into it.

Achievements include successful entrepreneurship, entry into elite universities... or for women, just being beautiful.

(Pic stolen from @KabirTaneja who is a young achiever himself). pic.twitter.com/h5aURz6cJB

It's 2018 and there's a young achievers matrimony meet that promises beautiful girls. This whole thing is regressive on so many counts. pic.twitter.com/qgp8qAXMsZ

It's 2018 and there's a young achievers matrimony meet that promises beautiful girls. This whole thing is regressive on so many counts. pic.twitter.com/qgp8qAXMsZ

So apparently, being "beautiful" classifies as a "young achiever". There is always a bias towards girls (in matrimony industry) - but explicitly mentioning it like this - WEIRD & STUPID pic.twitter.com/P45j6HbKiO

My guess is participants bring dais, wear a placard, write a speech and trot around their own award after doing setting with "beautiful girl" khopche mein outside The Leela. Then we've got a real Young Achievers Matrimony Meet. Someone call Mr. and Mrs. Sreeram to clarify stat. https://t.co/cqdHho4a4a