Artist G. Anjaneyulu’s works of art never stray far from his humble roots, even as they showcase the value and form of simple objects. 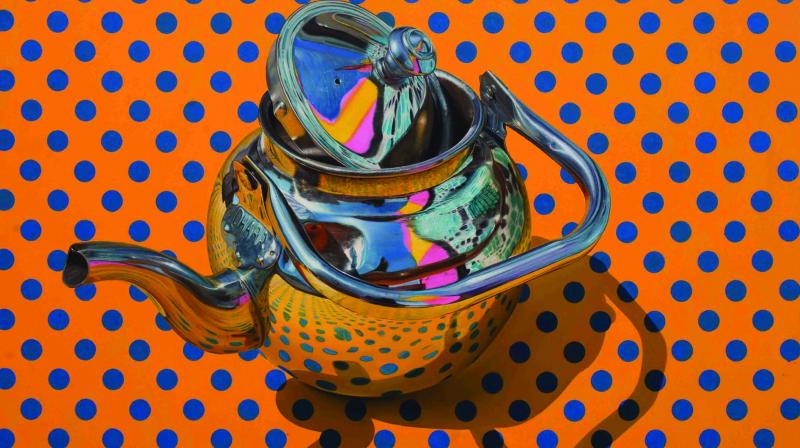 An untitled artwork by G. Anjaneyulu

For artist G. Anjaneyulu, the journey which started from his village in Nalgonda district to the well deserved fame that he finds himself surrounded with, has been as memorable as the myriad objects in his paintings are for art lovers.

Recalling the first ever work that initiated his long and passionate dedication to portraying objects picked up from daily life, he says, “The first painting in the series was the one I did just after I finished my graduation in painting from JNAFAU. The work contained an empty, regular photo frame placed on a white wall. I didn’t realise then that it was merely the threshold of an artistic journey that I would be exploring for a long time.”

The artist shares his early days which have had an undeniable influence on his works of art. “While in the village, I was inspired by my two elder brothers, both of whom are self-taught artists. They encouraged me to pursue my studies in fine arts from Hyderabad and that’s how I settled here. The connection to my birthplace is an indispensible part of my being and gets frequently reflected in my work,” says Anjaneyulu, who is exhibiting his works in a solo show titled Collections and Recollections in New Delhi this month.

The six paintings that are going to be displayed are based on objects handpicked by him from the rural terrain. The rustic ethos gets exemplified through the objects in all their modest simplicity and unpretentious innate charms. A steel kettle, an old iron box, a jute fishing basket and similar frequently used things that support and simplify the mundane activities by their utilitarian quality get recreated in his works with impeccable finesse. The elements are painted in all their real and truthful characteristics, in hyper realistic stylisation. Their magnified size grants them the attention they deserve while the pure white background accelerates the ambiguity of time and space. The weathered, dented and used aspects of the objects enhances their individuality and initiates myriad allegories about people who used and treasured them in the past.

As he works hard in the studio for his forthcoming shows this year, Anjaneyulu shares a recent and important achievement. “My painting received the second highest number of bids in a recent auction of works from South East Asia organised by Astaguru. I was pleasantly surprised about it and very happy that my work got such a satisfying response,” he shares.