A play that takes you through the life of these four girls, on a journey of self-discovery. 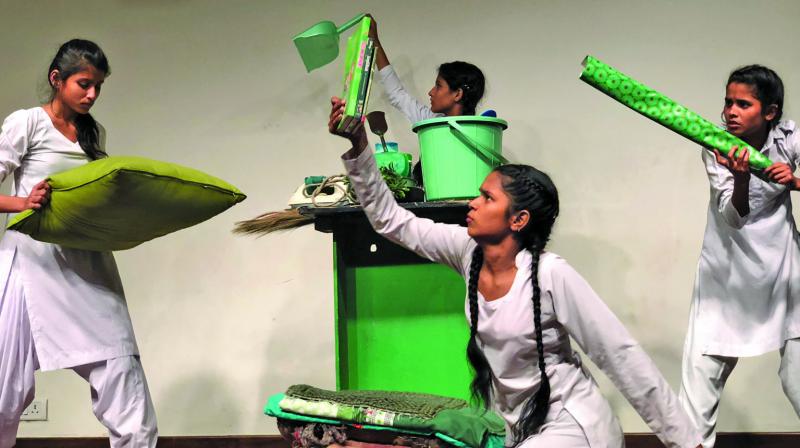 However, unlike mainstream Bollywood narratives, these girls don’t end up ruling the world, but instead find their true identity.

Set in the bustling slum of Delhi’s Nizamuddin, the play Bhagi Hui Ladkiyan revolves around the lives of four girls who narrate their story through conversations. From recounting their personal narratives, to the things they want to know about, what impacts them, these girls in there teens further unfold what they are unclear about.

Directed by Dhwani Vij under the Aagaaz Theatre Trust, the play, despite giving a personal storyline and based on lives of girls, talks about issues revolving around women.  According to Dhwani, the play is about finding one’s own identity, she says, “It is basically about identity — how I look at myself vs how does the world look at me. And we see the discovery of personal identity through these very specific narratives — me as a girl living in Nizamuddin basti, and me being a Musalman.”

A winner of the special jury award at the META (Mahindra Excellence in Theatre Awards) 2019, for Dhwani and the cast it was a chance to step outside their comfort zone and showcase a strong presence in front of the theatre fraternity. But more than the event, the team was excited to perform at the Kamani auditorium. “We knew that META always begins with some kind of anticipation, whether we’ll win something or not, but interestingly there was no such sense, neither in me, nor in the girls. We were really excited to perform at Kamani, which is so expensive that even established groups in Delhi do not get a chance to perform there. As theatre artists, these are exciting places to perform,” says Dhwani.

However, unlike mainstream Bollywood narratives, these girls don’t end up ruling the world, but instead find their true identity. Says Dhwani, “The intention hasn’t been to find some kind of message in the end or find some kind of ‘breaking free of shackles’ in the end. But remain true to what it is and share just that.”

Coming to the city for the first time and venturing into new territory, the director is positive that the audience will enjoy the play. “The stories are very real stories. Once we start listening to them, one sees how different aspects of the story speak directly to them, and that has been the experience of people who saw our play in Delhi too.  And all these incident they are not private, intimate or personal they become universal in that sense.”

As it goes with live performances, Dhwani says that these are a not a copy paste of the previous show and always involves tweaking and improvisation. The actors also try to understand the vibe of the audience and adapt accordingly.

Though she is confident about her actors, the director is curious to see the audience reaction. “We will be performing to a different kind of audience who has a habit of going and watching theatre, which you don’t see happening in Delhi. So we’re interested to know how the audience reads our play, as there is a lot of improvisation that happens between the girls inside the play. I am just curious to know how the audience of a different city perceives our play,” she shares.

You can catch the play today and tomorrow at The Mumbai Assembly, at 7.30 pm