They come from different parts of the world to learn yoga in India and then graduate to becoming teachers. 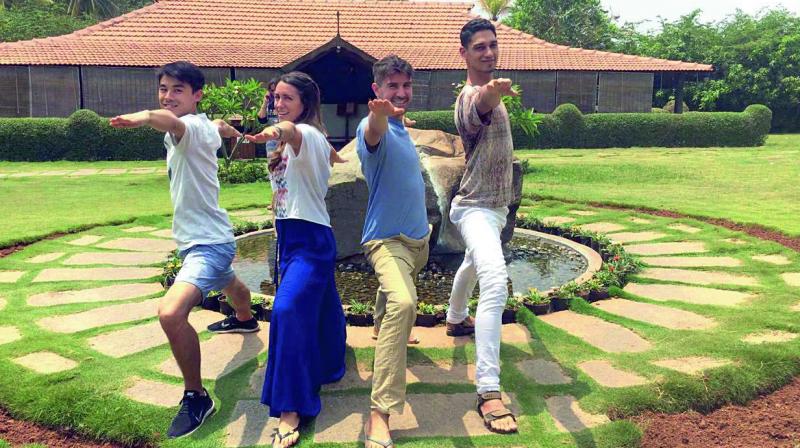 You hear them chant an ‘Om’ and you watch them master a difficult asana with utter ease. No, we aren’t talking about desi yogis who are regular practitioners of yoga, but these are yoga buffs from outside India, who are choosing Bengaluru as their destination to train and become yoga teachers. Meet the videsi yogis, whose love for yoga will leave you astounded.

Alexandre Ali from Uruguay has come down to the Art Of Living ashram for the yoga teacher’s training course. Having started yoga in her home country two years ago, Ali says, “I did Iyengar Yoga and realised that it changed me in many ways. It helped me with my headaches. I started meditating as well and I wanted to share this knowledge. Yoga isn’t just about flexibility, it’s about delving deep down inside.” Ali wants to start a blog to share her experiences and also intends to teach yoga in her country.

As for Kenneth Lam from Hong Kong, his tryst with yoga happened last year when he went for a retreat to Sri Lanka. “My logical side was too dominant earlier. We often chase education, high status etc, but I realised that I wasn’t enjoying these things anymore. Thanks to yoga, I started experiencing a sense of joy and peace every day, so I thought ‘why not share the benefits and create a community where people can share the same values?’” he says.

For 28-year-old Jonathan Merla from Argentina, his interest in yoga was ignited eight years ago. As someone who was open to learning new things, he took to yoga and meditation, which blew his mind. “I started doing research and discovered more courses. My first time in India was in 2011 and I visited Jaipur, Goa, Delhi, Mumbai, Agra and Varanasi,” says the yogi with wanderlust.

Back home, Jonathan is a freelance TV producer. He now dreams of opening a restaurant by the beach where he can teach yoga and also indulge in his favourite sport- surfing. “When I started out and turned vegetarian, my buddies were wondering what I was doing, but now the same people have started doing yoga!” he smiles.

S-VYASA is another university which sees numerous foreigners taking up yoga courses. Giulia Carra, an Italian massage therapist who did her instructor’s course there, says, “Initially, the restrictions wanted to make me quit. I had to wake up at 5 am every day. But slowly, everything changed. My teacher told me that if you practice daily, then you will have no problem waking up early and you will be able to concentrate better. That’s exactly what happened! The change was incredible - it was like a miracle.” Giulia now plans to teach yoga in her home country in Italian. “I also want to travel the world teaching — by the beach! Right now, Bali is on my mind,” she says.