The trio performed Baiões, a traditional musical style from the Northeast of Brazil. 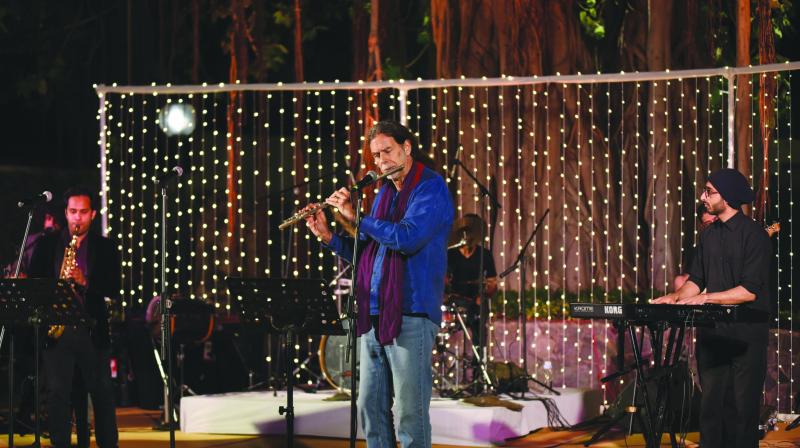 German ambassador Walter J. Lindner thrilled a select audience in the Capital when he chose to play the flute at a concert on a pleasant Sunday evening recently.

German ambassador Walter J. Lindner thrilled a select audience in the Capital when he chose to play the flute at a concert on a pleasant Sunday evening recently. The performance by the German envoy was meant to be a surprise, and it was one that left the audience spell-bound. Lindner, also a well-known musician chose to play along with the “Revisit Project”, a jazz-funk band, as part of the “Under the Banyan Tree on a Full Moon Night” concert series at a complex overlooking the historic 13th century Qutub Minar.

“It was quite exciting to be playing here,” the German envoy said, shortly before he went up on stage at the recent concert organised by Teamwork Arts. This was his second performance, the first being about seven months ago when he had similarly amazed another audience.

Lindner’s musical talents are well known. A popular musician plays the flute and piano along with several other musical instruments and has several CDs to his credit. Having studied music back home in Munich and also at Boston in the United States, Lindner has a professional studio at his residence and has not let his extensive responsibilities as a diplomat deter him from his love and pursuit of music.

Just before the German envoy performed on stage at the ‘Under the Banyan Tree’ concert, the João Bittencourt, Brazilian jazz trio also swept the audience off their feet in a masterful performance that was supported by the Brazilian Embassy. The trio performed Baiões, a traditional musical style from the Northeast of Brazil.

A popular face on the diplomatic circuit, the tall and charismatic German envoy has sometimes had the opportunity of mixing a bit of music with diplomacy. Diplomats recalled an incident when Lindner had arranged for a performance by a band at the sprawling lawns of the German embassy to mark the National Day celebrations of his country in New Delhi last October. That performance was cancelled due to a sudden thunderstorm and heavy downpour but not one to be disappointed for too long when people consoled him, he had smiled back, saying, “Don’t worry, we’ll organise it again.”