Nine-year-old Mandela Vineela became the youngest person in Asia and the second youngest in the world to scale Mt Kilimanjaro. 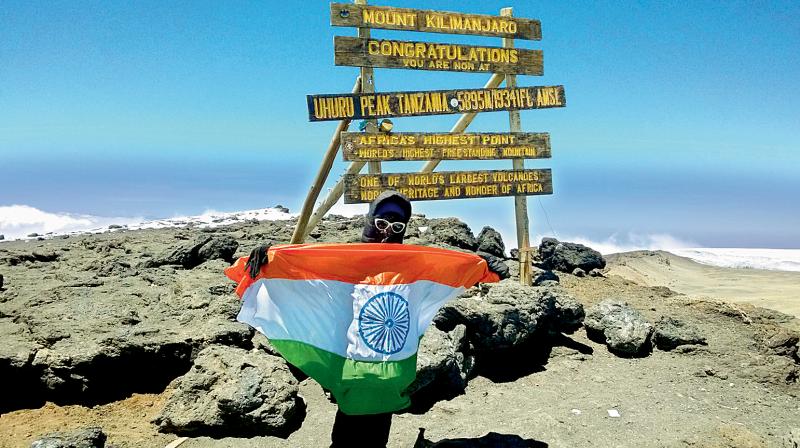 Vineela poses with the tricolour atop Mt Kilimanjaro.

Hiking up a mountain top in chilly weather is a challenge by itself. Imagine how much harder it would be if it were to rain heavily the earlier night, leaving you to tread the trail through mushy, muddy tracks! Nine-year-old Mandela Vineela, a class IV student from Hyderabad, did just that when she scaled up Mt Kilimanjaro, The highest mountain in Africa, becoming the youngest in Asia to climb the mountain and the second youngest in the world to achieve this feat.

On her journey to the summit, she held her brother’s hand who guided and trained her. “I used to see my brother train, like running and jogging, for long hours. At first, I didn’t know the importance of being fit. So, I thought I should join him too in his training and that’s how it all started a few months back,” says Vineela. The journey to the peak was not smooth at all — it had several glitches. The first, which the brother-sister duo faced, was at the immigration check point in Delhi. “Any minor travelling abroad has to be accompanied by her at least one parent and she didn’t have anyone accompanying her. We were to get Visa on arrival, so the clearance took a while and we were grilled by the authorities,” says her brother, Vineel. “The schedule was for seven days, but we completed it in six days, by resting only in alternate camps. There were six to seven intermediate camps on our way to the top. We skipped a few and climbed for a straight 12 km stretch, instead of 6 km a day, to reach faster,” he further shares.

“I was scared at first, but once it all started, I was fine,” she reveals. “My passion for sports and keeping fit helped me reach the summit. Children below 10 are not allowed, but we secured special permissions to do that. I went through rigorous training for a month before the journey and ensured that I followed a proper diet of boiled vegetables and fresh fruits,” she says. Their parents were against the trip at first, but finally, trusted their children’s plan. “My mother was very scared to let me go but when she saw us training, she believed in us,” says Vineela, before rushing off to play with her friends.