Carols take the lead in protest

Protesting atrocities against minorities, Mumbaikars got together to join their voices and sing carols. 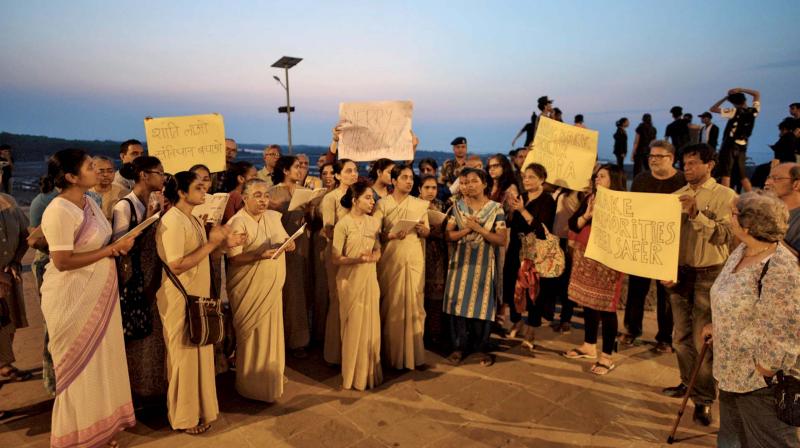 Lights are twinkling at door and windows, Christmas trees laden with bells, stars and pretty ornaments stand tall by doors office spaces and restaurants. Lit-up stars hang at windows and along the streets. Everyone can feel Christmas in the air. But instead of simply celebrating the spirit of joy and giving, it seems as though the communalism and hatred has poisoned the atmosphere this year.

A group of 30 Christmas carol singers were detained by the Madhya Pradesh police on Thursday evening in Satna and were accused of “converting people”. While they were held at the police station, the Bajrangi Dal allegedly set fire to a priest’s car as well. While one has heard news of the odd assault of a Christian priest from the very interiors of the country, an out and out anti-Christmas move like this is unprecedented.

Closer home, Amruta Fadnavis had to face trolls when she attended a Christmas charity event. Trolls claimed that she was ‘promoting evangelism’ and ‘encouraging Christian missionaries.’

To protest against this obvious action against minorities, Saket Gokhale organised a protest at Carter Road, Bandra on Saturday where hundreds gathered together to join their voices and sing carols. “Christmas has always been celebrated as a very secular festival in India. Everyone is happy to get their Christmas holidays and even those who don’t particularly follow Christianity have celebrated the festival for decades now. This out and out attack on Christmas was shocking,” said Saket, who organised the event and appealed to Mumbaikars via Facebook.

As the sun set over the Arabian Sea, bathing those gathered in reds and oranges, protesters began to arrive, some holding placards, others empty handed, but all of them ready to lend their voices for a worthy cause.

“The best way to protest is to do the very thing that has these groups have been trying to ban. We are well within our rights to gather and sing, but it also acts as an effective way to show these extremist groups,” Saket added.

Among those present were actor and representative of Citizens for Justice and Peace, Joy Sengupta. Joy, who had had a big hand in helping organise the protest, said, “Just as in the case of Not in My Name, where people gathered together because they believed in the cause, this protest has all these people joining in simply to show their support. It doesn’t matter if you’re a caroller or not. If you’ve heard Jingle Bells as a kid, you can join in,” he smiled.

Christmas carols are not just about Jesus Christ but about the message of peace, love and harmony, Joy was quick to remind us. “In America, the entire blues and soul genres came from gospel singing, while here in India, our devotional songs have become an integral part of our classical music. A Christmas carol is not just a religious song, but also one that spreads the message of peace and love, which we must remember at a time when hate crimes have risen at such an alarming rate,” he explained.

Tanveer Khan was one such protester, who rose above religion to look at the bigger picture. “I love Christmas, much as I love most festivities. But during Christmas, you have beautiful decorations along the streets and there are a lot of parties to go for, so it’s one of my favourite festivals,” he shrugged. “The current government is trying to foist its own agendas on everyone. Those who are dissenting are under attack, whether its physically, or reputation or otherwise. So, when I heard that Saket is organising this protest, I knew that I definitely needed to be a part of it,” he added.

As the strains of Silent Night, Holy Night wafted along the evening breeze, carried by the voices of a diverse group of people, it seemed as though the motley group of carollers captured the true spirit of Christmas.